Academy Research Fellow Kaisa Matomäki, who works in the Department of Mathematics and Statistics at the University of Turku, receives the Academy of Finland Award for Scientific Courage. According to the Academy of Finland, Matomäki has shown exceptional scientific audacity, creativity or innovation in research. 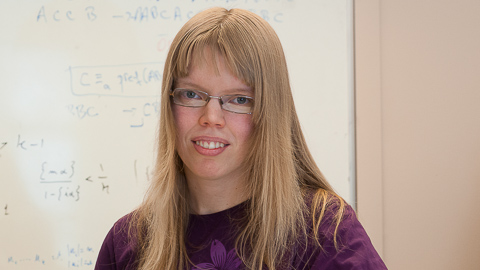 ​The Academy of Finland sees Matomäki as one of the world's top analytical number theorists. Analytical number theory, and especially research focusing on prime numbers, has a long history and contains classic unsolved problems. On the other hand, the field is very current due to recent breakthroughs, some of which are related to Matomäki's research. Matomäki specialises in prime numbers which can be characterised as the building blocks of numbers.

One of the prime number problems Matomäki studies is the so-called Goldbach's conjecture, according to which every integer greater than five can be expressed as the sum of two or three primes.

– I conduct pure basic research. Prime numbers are used, for example, in cryptography, but my own research is not directly linked to encryption methods. Perhaps in the future, my research can be utilised in cryptography as well, says Matomäki.

In its award reasoning, the Academy of Finland states that Matomäki has progressed in her field of research with determination and has accomplished a lot in regard to her young age. Her publication profile is extremely high both in quantity and quality: her around thirty publications have been extremely well received and have significantly improved the earlier works of many eminent number theorists. She chooses her topics with courage and uses unusual methods while studying them.

The Academy of Finland granted another award for social impact to Academy Research Fellow Hélder A. Santos from the University of Helsinki.

The Academy of Finland grants these awards for the 14th time. The award is a mouth-blown ornament, entitled "The Moment", designed by Miia Liesegang.