The Ceremonial Conferment of Doctoral Degrees of all the faculties of the University of Turku was organised on 28–30 May. 12 Honorary Doctors and 110 doctors were conferred in the Ceremony. 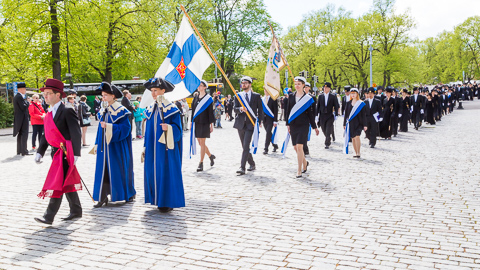 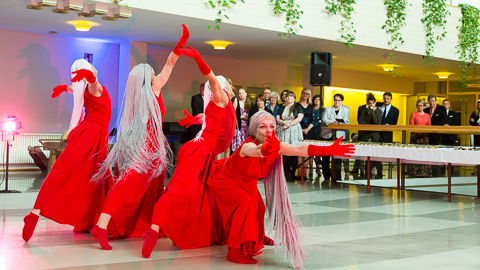 The three-day Ceremonial Conferment of Doctoral Degrees started on Thursday, 28 May, with the Sword Sharpening Ceremony at the University's Main Building. At the Sword Sharpening Ceremony, the young doctors and Honorary Doctors gathered together the night before the Conferment Ceremony to sharpen the sword that symbolises their intelligence with grindstones wetted with sparkling wine.

Honorary Doctor of Law, President of the Supreme Court Pauliine Koskelo sharpened her sword with the assistance of the Dean of the Faculty of Law, Jukka Mähönen.

The doctors were conferred in the Conferment Ceremony which was organiced at Turku Concert Hall on Friday, 29 May. At the Ceremony, 12 Honorary Doctors and 110 young doctors were conferred by faculties. At the event, the conferrer of the philosophical faculties gave a speech, after which the Honorary Doctors and promovendi were given the marks of their rank: the doctoral hat, sword and diploma.

The conferred doctors made their way from the Concert Hall to the Cathedral for the ceremonial service along Aninkastenkatu Street in the Academic Procession.

The Conferment Banquet was held at Turku Castle. According to tradition, the programme included speeches to the University and science, to the Conferrers, Honorary Doctors and young doctors as well as their responses.

After the Banquet, the doctors and their companions proceeded to the Ceremonial Conferment Ball at Turku VPK House. The promovendi practised the Polonaise and other dances in dance practises during spring.

A sailing trip to Naantali concluded the conferment festivities.

>> Watch a video of the Ceremonial Conferment of Doctoral Degrees 2015