While monitoring the exceptional supernova SN 2013fc, Doctoral Candidate Tuomas Kangas from the University of Turku serendipitously discovered a new supernova in the same host galaxy. 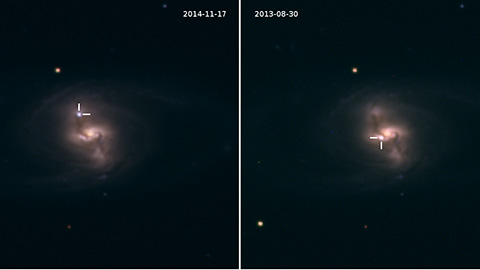 ​Tuomas Kangas discovered the new supernova on 17 November 2014 using images taken at the ESO-operated telescope NTT (left). Supernova 2013fc had exploded in the same galaxy in the previous year (right).

​The new supernova was discovered in the galaxy where the previous supernova had recently faded. The discovery belongs to an especially bright and spectroscopically unusual sub-group within Type Ia supernovae. A normal Type Ia supernova, at its peak brightness, is roughly five billion times brighter than the Sun, while supernovae in this sub-group are nearly twice as bright.

– I have been monitoring the supernova SN 2013fc systematically since autumn 2013. SN 2013fc belongs to a rare class associated with dense gas surrounding the exploding star. While analysing the late-time images of this supernova, I found another one in the same galaxy, describes Kangas.

ESO 154-G10, the host galaxy of both SN 2013fc and the newly discovered supernova, is located roughly 260 million light-years from us and belongs to the class of luminous infrared galaxies. In such galaxies new stars are formed rapidly, and thus stars also explode as supernovae at the end of their lives considerably more often than in galaxies like the Milky Way.

– This supernova will be monitored extensively in the coming months, says University Research Fellow Seppo Mattila from the Finnish Centre of Astronomy with ESO (FINCA).

The First Supernova Discovery of an International Survey

The data used by Kangas were obtained on 17 November 2014, using the 3.6 meter New Technology Telescope (NTT) operated by the European Southern Observatory (ESO) at La Silla, Chile. These observations are a part of the Public ESO Spectroscopic Survey for Transient Objects (PESSTO), a large international programme for classifying newly discovered supernovae and for monitoring the rare and otherwise interesting ones in the visible and infrared wavelength bands.

The new discovery gains additional significance from being the first supernova discovered as part of the PESSTO programme itself. The survey began in 2012, and has since classified almost six hundred supernovae and monitored over a hundred.

The PESSTO collaboration includes researchers from 23 different institutes around Europe, Israel, the United States, Australia and Chile. The programme is led by researchers from Queen's University Belfast in Northern Ireland. Researchers from Turku, working for the Tuorla Observatory or FINCA, are active members of the programme as well.