Stars substantially more massive than our Sun end their lives in a poweful supernova explosion. However, it is unclear what happens in the latest stages of the stars’ lives before their explosive final fate. An international team of astronomers led by Dr Francisco Förster from the University of Chile and including Dr Hanindyo Kuncarayakti from the University of Turku has now found evidence that these stars lose weight shortly before their death. 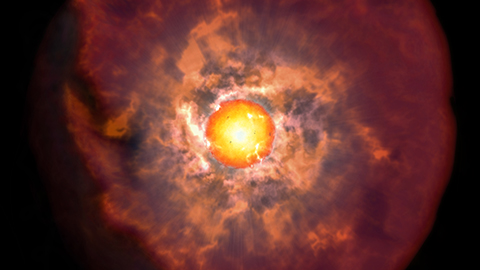 An artist's depiction of the red supergiant enshrouded by the lost material.

​The team used the 520 million pixel Dark Energy Camera at the Cerro Tololo Observatory, Chile, to catch supernovae exploding in real time, focusing on supernovae that are rich in hydrogen. This kind of supernovae are thought to be the deaths of red supergiant stars, a type of star so enormous it would engulf the whole orbit of Earth if placed at the Sun’s position.

Using observations from telescopes in Chile including the 3.5 meter New Technology Telescope and the 8.2 meter Very Large Telescope of the European Southern Observatory (ESO), they found that the light surged at the birth of these supernovae brightens more rapidly than expected.

These observations puzzled the astronomers as the existing models do not predict such a behaviour. Dr Takashi Moriya from the National Astronomical Observatory of Japan calculated hundreds of new supernova models in order to find an explanation. The observations were found to be more consistent with models that include around 10% of the Sun’s mass of material close around the exploding star.

The interaction between the supernova shock and this surrounding material turns some of the enormous explosion energy of the supernova into radiation, which results in the supernova brightening significantly faster than expected otherwise.

– This material is very likely to have been produced by the star preceding its death. The star must have experienced an increase in mass loss in a relatively short period of time just before its explosion, explains Dr Kuncarayakti.

As is also the case for our Sun, stars lose mass during their lifetime through a steady stream of escaping particles called a stellar wind. For some reason, just before their death, these red supergiants spew out larger amounts of material than they normally do, which ends up as close-by material surrounding the star.

This discovery challenges our understanding of how stars evolve and die. These results suggest that such short-period increased mass loss episodes must occur in the majority of the red supergiants.

>> The study was published in the journal Nature Astronomy

University Communications
Faculty of Science
Department of Physics and Astronomy