Throughout the history of life, new groups of species have flourished at the expense of earlier ones and global biodiversity has varied dramatically over geologic time. A new study led by the University of Turku shows that completely different factors regulate the rise and fall of species. 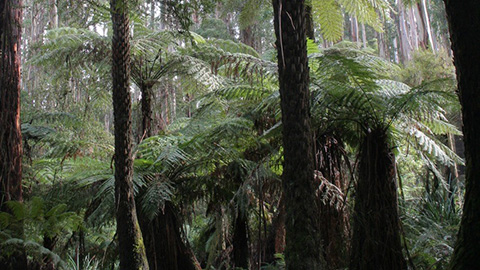 Tree ferns still occupy the tropical moist forests in Australia, even though they shared their “golden age” with dinosaurs.

​​​​– Previously, the debate has been about whether biodiversity is regulated mainly by the interaction between species or the external environment, explains researcher and leader of the study Samuli Lehtonen from the Biodiversity Unit of the University of Turku.

In order to test these competing views, Lehtonen compiled a group of top researchers from Finland, Sweden, Switzerland and the United States. The researchers focused on the diversity of ferns and the factors that influenced it during the past 400 million years. Ferns have survived no less than four mass extinctions and during their extremely long evolutionary history, the dominant fern groups have changed repeatedly.

– Thanks to the rich fern fossil data and a large amount of DNA information from living species, we were able to test multiple competing evolutionary models for the first time by using new analytical methods, says Professor Alexandre Antonelli from the Gothenburg Global Biodiversity Centre (GGBC) who participated in the study.

The observed variation in the fern diversity was compared with the variation in other groups of plants and in the environment, such as continental drift and climate changes. The results show that changes in the environment strongly influence extinctions but surprisingly not the origination of new diversity. Instead, the formation of new fern species is accelerated when the fern diversity is low (e.g. after mass extinctions). The study suggests that origination of new species is mainly a neutral process in which the probability of speciation increases when diversity is low.

– Factors affecting extinction and origination of species are surprisingly different, with past climate change having the highest impact on extinction but not on originations, notes researcher Daniele Silvestro from the GGBC who developed the mathematical model used in the study.

The old competing hypotheses seem to explain different sides of the same problem, making arguing about them pointless unless extinctions and originations are studied separately.

The results of the study were published in the Scientific Reports journal.