According to a new study, sleep problems among infants are very common and normally improve by the time the child reaches the age of two. The study was carried out by the Finnish Institute for Health and Welfare (THL) and the University of Turku.

The study found that large changes take place in the sleep of infants during their first two years: the time taken to fall asleep reduces to an average of 20 minutes by the age of 6 months, and by the age of two small children wake up are on average only once during the night.

At the same time, the total amount of time spent sleeping reduces to around 12 hours per day as daytime naps get shorter. 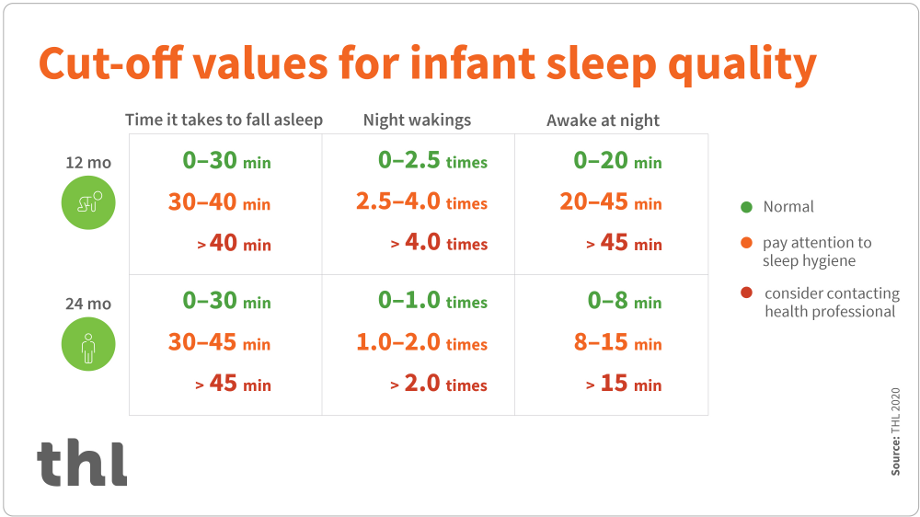 The study was based on the CHILD-SLEEP and FinnBrain birth cohorts. In total, the cohorts contain data on approximately 5,700 Finnish children, and information provided by the their parents.

The primary goal of the study was to investigate how infants’ sleep develops during their first two years.

–Up until now, we have not had any reference values for good infant sleep that are based on large data sets. Now we know that the individual differences are very large, and that patterns relating to falling asleep, waking up, staying awake at night and sleeping rhythms often develop at different rates, says Research Manager Juulia Paavonen from THL.

Secondly, the study sought to examine how large the individual differences in sleep among infants can be while still falling within the boundaries of normal child development. This would save parents from unnecessary worry and would help to focus interventions on genuine sleep disorders.

–Those children whose quality of sleep is clearly different from the average would probably benefit from situation assessment at, for example, the child welfare clinic. There are many tools available for reducing children’s sleep problems, Paavonen says.

– It is important to look at the child’s well-being as a whole, Paavonen emphasises.

–If the parents are very concerned about their child or their own ability to cope, help should be sought even before these levels are reached, Paavonen emphasises.

The FinnBrain and CHILD-SLEEP cohort data is utilised by a wide consortium which includes the Finnish Institute of Health and Welfare, the Pirkanmaa Hospital District, the Universities of Helsinki, Turku, Tampere and Eastern Finland, and the Paediatric Research Center of the Helsinki and Uusimaa Hospital District.