The Brightest Explosions of the Universe Are Powered by Magnetic Stars

The most luminous supernovae – exploding stars – seem to be powered by small and incredibly dense neutron stars, with gigantic magnetic fields that spin hundreds of times a second. 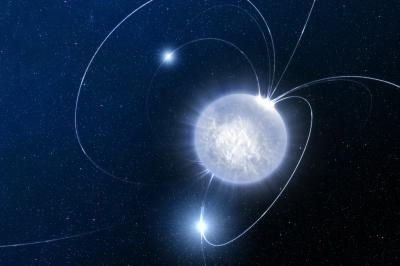 ​Massive stars die in spectacular explosions that are called supernovae. Supernovae are several billions of times brighter than the Sun.

It has been known for decades that the heat and light from these supernovae come from powerful blast-waves and radioactive material. However, recently some very unusual supernovae have been found, which are too bright to be explained in this way. They are hundreds of times brighter than those found over the last fifty years and the origin of their extreme properties is quite mysterious.

Researchers from the Finnish ESO-center Seppo Mattila and Erkki Kankare and Tuomas Kangas, a doctoral candidate from the University of Turku participated in an international research studying the origins of the brightest explosions of the universe. In the research led by The Queens University in Belfast, two of the Universe’s brightest exploding stars were observed for more than a year. The research was published on 17 October in Nature Magazine.

The Observations of Scientists Did Not Match up with Theoretical Models

For a year, an international team of scientists observed the slow death of these supernovae using some of the world’s most powerful telescopes situated around the world. The scientists in Turku used a 2,5m Nordic Optical Telescope (NOT) at infrared wavelengths invisible to the human eye.

According to some theories, the brightest supernovae are caused by super-massive stars, with masses that are equal to 40 Suns, ending their life in an explosion in a manner quite like a giant thermonuclear bomb.

However, the findings of the team are not compatible with theoretical models.

–Our findings suggest that their origins may be better explained by a type of explosion within the star’s core which creates a smaller but extremely dense and rapidly spinning magnetic star, a magnetar. Therefore, super-massive stars would not be needed to explain bright supernovae, explains researcher Seppo Mattila.

The magnetar born in the explosion has a very strong magnetic field that spins incredibly quickly – about 300 times a second. As it slows down, it could transmit the spin energy into the supernova, via magnetism, making it much brighter than normal.

–In the future researchers can also study the first, potentially super-massive stars of the universe by observing their explosions as supernovae. Therefore, studying the origins of the brightest supernovae of the universe is a very hot topic of research at the moment, states Mattila.

>> Nature: Slowly fading super-luminous supernovae that are not pair-instability explosions

The press release of the Queens University in Belfast has been used as a source, in addition to statements from the researchers in Turku.

The article has originally been published on 22 October.