The Phoenix science award of the Turku Finnish University Society was granted to Academy Professor Virpi Lummaa for her significant and creative interdisciplinary research on evolution. 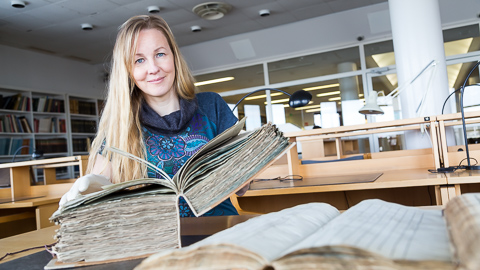 ​The Phoenix award was distributed for the first time and the ceremony was held at the centenary celebration of the Turku Finnish University Society at the Old Academy Building on Friday, 3 October 2017.

The award was handed by the vice chair of the board and the chair of the science award committee Pekka Vallittu to Academy Professor Virpi Lummaa as a recognition of and encouragement for her creative and internationally high-quality research.

The justifications for the award state that Lummaa has successfully internationalised and strengthened high-quality scientific research in Turku.

– After completing her education in Turku, Lummaa's significant work period in top European universities and her return to the University of Turku to develop her field of science to the highest level are exemplary, says Vallittu.

Professor Lummaa and her research group study natural selection in human communities and biology of ageing in which she has two large and ongoing research projects.

– I'm tremendously happy and excited about the award. It is  great to be able to show that with Finnish education and research you can go far and hopefully produce new information. The Turku Finnish University Society's work in supporting both education and research for the last hundred years is now more important than ever when research funding and university budgets are otherwise cut, says Lummaa.

With the Phoenix science award, the Turku Finnish University Society wants to support high-quality scientific research conducted at Turku, look into the future, and highlight the significance of scientific work in an educated society. The board of the Society and selected experts chose the winner of the Phoenix award. Nominations for the award were collected with an open call last spring.

The Turku Finnish University Society was founded in November 1917 and its purpose was to organise a fund-raising for founding a Finnish-language university in Turku. In the end, there were 22,040 donors – farmers, officials, teachers, artists, scientist – whose support enabled the founding of the University of Turku in 1920.