From Bosnia and Herzegovina to Finland - Building a career in biomedical imaging in Turku, Finland. 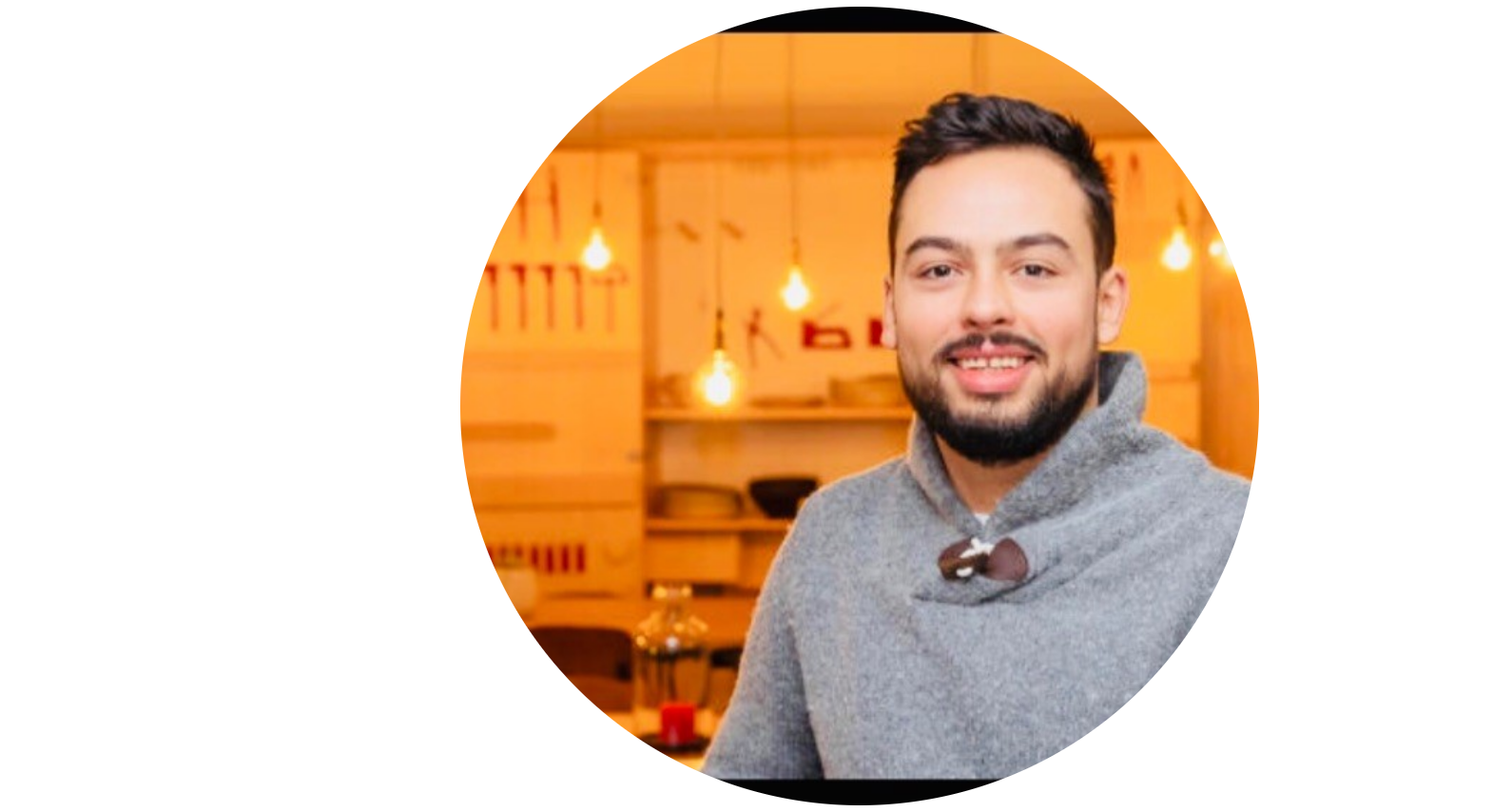 Dado Tokic moved to Finland from Bosnia and Herzegovina in 2018 to study at the Masters degree program in Biomedical imaging at the University in Turku. He currently works in Turku as a Project Specialist at Turku Bioscience Centre. In his story Dado speaks about his experience of studying in Finland, falling in love with Turku, playing ice hockey, learning Finnish through everyday life, and finding his dream job.

How did you end up studying at the University of Turku?

I grew up in Bosnia and Herzegovina where I studied my bachelor's degree in biology and majored in genetics. I was actively looking for a place to continue my master’s studies. I was searching for a good university at a master’s degree online portal for different options based on my interests and I saw University of Turku’s Master's degree in Bioimaging as an option and that’s what I ended up selecting. It was quite by chance that I found the University of Turku. Finland has one of the earliest application time frames in early spring, so I thought of giving it a go and I like ice hockey very much and that was my big push towards Finland.

I was interested in the degree program at University of Turku because it was not that common, and I decided to give it a go and I got in! That’s how I ended up in Finland. When I accepted the study place and told my family and friends that I am moving to Finland they were quite surprised. It was a big decision, but I have no regrets about it. It's been a wonderful experience and I love being in Turku.

What have you studied and how does it relate to your work now?

I have background in biology, I studied it for 4 years as a part of my bachelor’s degree in my hometown and majored in genetics. I came to Turku knowing about bio-imaging but not very experienced in it because of lack of facilities back home so I got here theoretical knowledge and what is great about this degree is that it is extremely broad and multidisciplinary so you can choose different paths. I chose image analysis that was my focus and now I have a job within that field and that’s simply great. So yes, that was my major. I am now coordinating a program based on that. I also consider it a great honor that I got this opportunity to be able to coordinate a program in my field.

How has been your student experience and life in Turku?

It was great! After accepting my student place, I made the decision to move to Finland quite fast. So, I didn’t know a lot of Turku and Finland beforehand – I just decided to try it out. Studying in Turku was quite different from studying in Bosnia and Herzegovina. Student life there is similar as a European country but still different from how it is in Finland.

Here in Finland, it’s much better organized, as in more student oriented. I didn’t know what to expect so I was quite pleasantly surprised that professors and teachers are so friendly, and how genuinely interested they are in the students. The degree was good and required a lot of knowledge but there is also this individualized touch. I loved the fact that in Turku I could approach the professors directly and that the students are not just a number but are cared for personally.

About student life I had no idea what to expect when I was moved to Turku, but it was a great experience. The city is the perfect size for me because I like to be on the move every day on my bicycle and play ice hockey or just have quick lunch and coffee somewhere and in Turku this is possible as everything is within reach.

I love Turku so I also worked quite hard to stay here. Student life for me was just like that, for the first year I was exploring and meeting so many new and interesting people and I made so many new friends. Everything is close by, and this city is very student oriented. The cafeteria and library especially are so accessible, and this was a big shock for me because I come from a different environment. There are certain facilities and its usually hard to get places and it was really refreshing to experience this in Turku. I remember once a professor, once asked me a question, and I was so shocked that he was interested in my opinion and for me it was positive and super nice

How has your experience been about learning Finnish and integrating into Finnish society as an international student?

Finnish for me is an incredibly unique language and I don’t think there is any other languages that have a similar structure. I had a mandatory Finnish course as a part of my master’s studies, and I liked it and I actively decided to study Finnish more as I knew I was going to be here for at least 2 years as that was the minimum duration of my studies.

What happened is that I found an ice hockey team quite early when I moved to Finland and they are all Finns and although they spoke to me in English but along themselves they would just talk in Finnish and that was actually a great push for my language learning because I was listening to them at least a few times every week when they talked and joked and after sometime I started to catch some words and that’s how I picked up the language.

It was a great leap for me towards learning it and while I was studying, I was working in a coffee shop, Café Art. There I spent one year working during my studies and that place made me speak Finnish. I wasn’t shy and I just tried to speak and it unlocked Finnish for me. In the early days, I was just copying what my coworkers were saying and that was particularly good because after some time I felt much more natural, and I wasn’t shy so that helped a lot. Of course, it was hard, but I enjoyed it.

Nowadays I work for a Swedish university in Turku, Åbo Akademi, and I can’t comprehend Swedish yet, but I still do daily activities and simple conversations in Finnish as long as there is no politics involved so I like that. And now I feel like I can study more because now I can already communicate and do things in Finnish. And Swedish language, I will give it some time, that will also happen.

How important is language learning for international students in Turku for those that want to stay in Turku after their studies?

For me it was useful later when I applied for jobs although Finnish was not a mandatory requirement, but it helped that I knew some – it's always a plus. And my experience was that when I tried to speak to people in Finnish, Finns were very interested and excited because they see me trying and people are very friendly and helpful. It’s a hard language but knowing it helps.

The language courses are important as a foundation and from my experience nothing is better than just jumping into situations and just trying to speak Finnish.

Any tips for job seekers in Turku?

Be active and don’t be shy. Interacting with people can only bring positive outcomes because people appreciate it here. Just go for it and don’t be afraid of the unknown. Very rarely something bad will happen from leaping into the unknown, it usually rewarding in Finland as there is always someone that you can get useful advice from. Just talk to people and they will point you in the right direction. So just speak your mind and that’s very productive here and there is a good environment for that here. This would be my biggest advice: Be active.

Now that you have been working for a while, do you miss something about student life?

Well, in a way I miss some of the free time that a student usually has like for example in my second year I could just go mid-day for a coffee in between classes. Also, at work now it’s quite good when it comes to distribution of free time but still its work so as a student there was a little more freedom that I miss. The studies were very nicely put together, so you have the entire day to study and plan other activities as you want. So that’s one thing that I miss. Most of my friends were students so we would spend time together every day. We still hang out but now less often and less spontaneous, but I still appreciate it. But that’s the one thing that I miss. And of course, student cafeterias, UNICA.

Which student associations and activities were you involved in as a student? How would you recommend students to be active?

I was a part of Campus Sport as a Sports Tutor. It was a part of the university’s sports complex and gyms where I organized classes. It was nice to meet new people and be involved in a bit different aspect of university life.

I was also a UTU Student ambassador which was a wonderful experience where I met many people and expanded my network.

In my free time I made music with my friends and that has continued. I play the keyboard, produce music and DJ. It began as a hobby and still is, but I do it more seriously now. We do some events and create some good music.

Just go for it and don’t be afraid of the unknown.
UTU Alumni Dado Tokic