The annual Finnish American Studies Association (FASA) seminar will be held this year jointly with the JMC Research Network. Four “how-to” sessions will tackle a range of practical issues that are often overlooked in our American Studies discussions. Each session will have several scholars offering comments, practical tips, and suggestions on each topic. The focus of the sessions will be on group discussion and learning from colleagues. The commentators will facilitate discussion and share their own best and worst experiences in the academic jungle. The workshop will also provide an opportunity for junior scholars to practice presenting their work in a succinct manner to other academics in a friendly setting.

NB! Pre-registered attendees only. More information can be found at https://sites.google.com/site/fasafinnishamericanstudies/fasa-seminar-2011

Whiteness in the Trumposcene: Civil Society, Security, and After 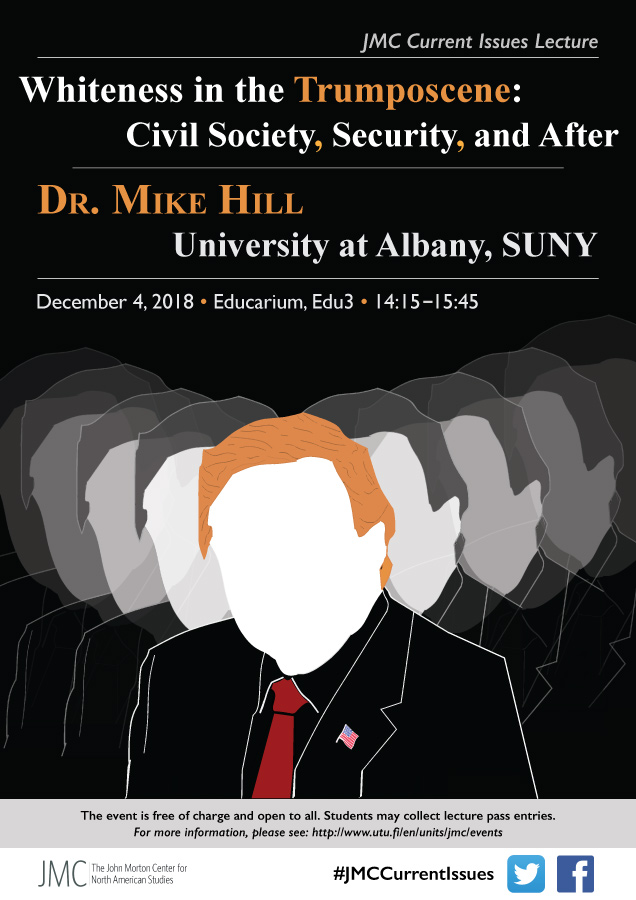 Scholars and commentators on the US Presidential Election all over the world are struggling to explain the election of Donald Trump to the White House. Michael Moore's blunt formulation in the new film Fahrenheit 11/9 expresses both the shock and the frustration of those on the progressive Left: "What the f*ck happened?" Without wanting to add to the monomaniacal focus on Trump himself, this talk examines the rise of the so-called blue-collar billionaire within the context of the now legitimated sub-discipline of critical whiteness studies. What did we learn about whiteness—and more crucially—what did we miss in the several decades now of all that learning? How did race scholars and political pundits alike fail to anticipate the "white lash" that helped put together the latest unholy marriage between "American" working-class voters and the “plutocracy, kleptocracy, autocracy, xenophobia, and racism” (Greenwald, 2018) now dominating the US political scene? In an age that, on the one hand, recognizes—and even encourages—the fluidity of identity in the context of a coming US white minority, while on the other, snapping back to the most retrograde elements of racial populism, what can we make of contemporary mutations in traditional democratic mainstays: civil society, consensus, mutual recognition, and not least, the security-related questions of economic vulnerability, as much as the permanence and ubiquity of war? What do identity politics look like after whiteness, especially in the sense that the state/identity relationship is both intensified and hollowed-out? This talk seeks to explain the paradoxical nature of contemporary whiteness as something lost and something gained, a historical fiction and a brutal reality, whose presence is being fortified to the degree that its coherence recedes into the past.

Dr. Mike Hill is Professor of English at the University at Albany, SUNY. He has published widely and teaches regularly eighteenth-century studies, materialist theory, contemporary US race relations, and more recently, the philosophy of war. His books are: The Other Adam Smith (Stanford: 2015) (co-authored with Warren Montag); After Whiteness: Unmaking an American Majority (NYU: 2004); Masses, Classes, and the Public Sphere (Verso: 2000) (contributing ed.); and Whiteness: A Critical Reader (NYU: 1997) (contributing ed.). Hill is currently completing Volume One of Ecologies of War:  The Human Terrain for the University of Minnesota Press. A second volume on war and climate change will follow.

The event is free of charge and open to all. Students may collect lecture pass entries. Organized by the JMC and sponsored by the UTU Department of Philosophy, Contemporary History and Political Science.

Finnish Pasts and Presents in the U.S. Midwest 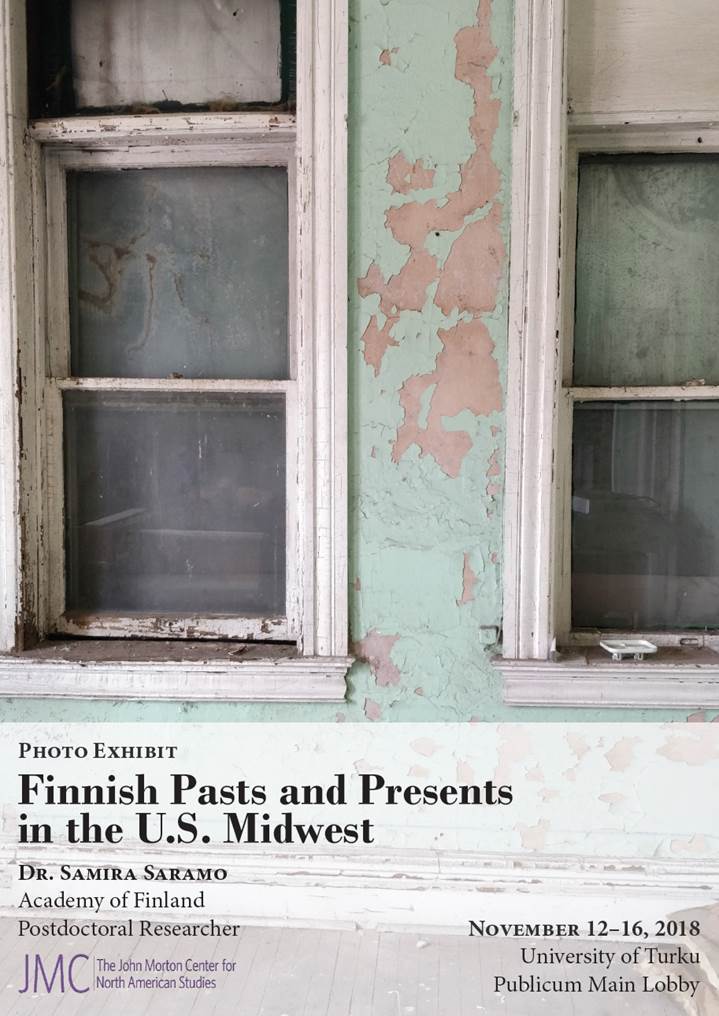 This past summer, Dr. Samira Saramo set off on a 5000 km research journey in the U.S. Midwest to build her Academy of Finland Postdoctoral project, “Death and Mourning in Finnish North America.” Along the way, it became clear that the places visited and the local knowledge-keepers are entangled in emotive Finnish pasts and presents that demand new ways of viewing and engaging in research. Samira turned to photography to place herself within the landscapes, objects, and histories that are too easily elided by traditional academic writing. 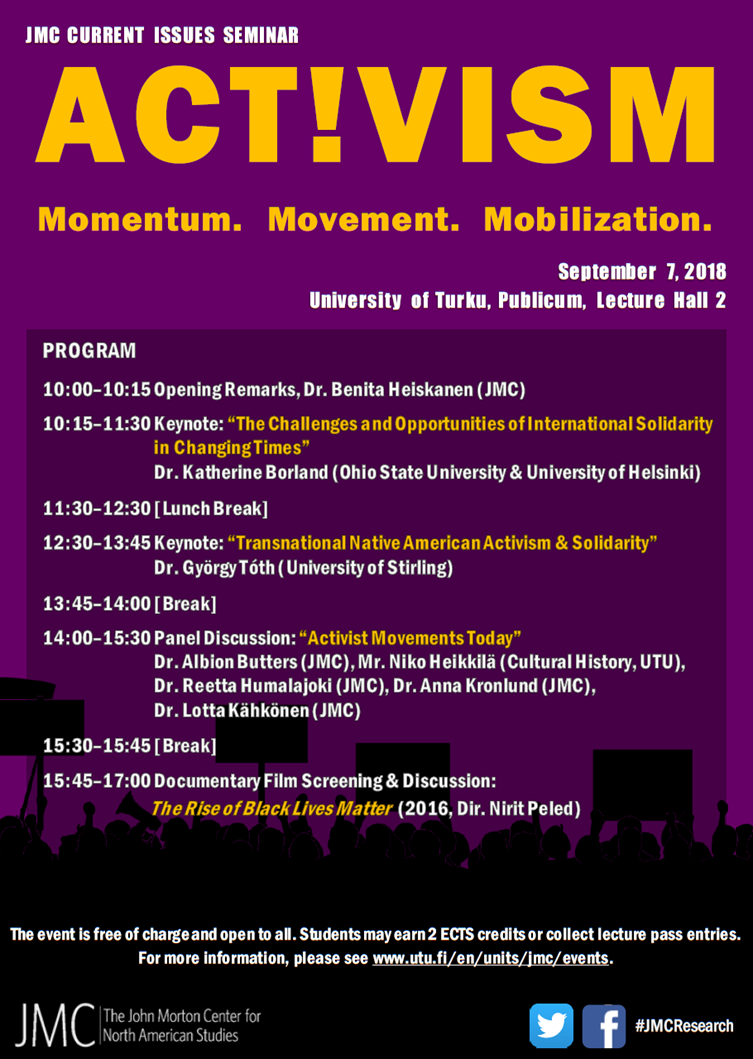 Black Lives Matter, Never Again, #NoDAPL, #MeToo. Half a century has passed since the iconic protests of the Civil Rights movement, but people in the United States continue to take to the streets – and now also to social media – to stand up for their rights. The United States today is a hotbed for social movements, with groups mobilizing against issues ranging from gun violence to environmental risks. This seminar will examine the forms that activism has taken in the U.S. within historical, theoretical, and contemporary contexts. What counts as “activism”? How can we show solidarity across boundaries of race, class, sexuality, and/or gender? What are the transnational and global impacts of U.S. social movements? What engenders moments of mobilization at specific points in history?

Organized by the JMC and sponsored by the UTU Department of Philosophy, Contemporary History and Political Science. 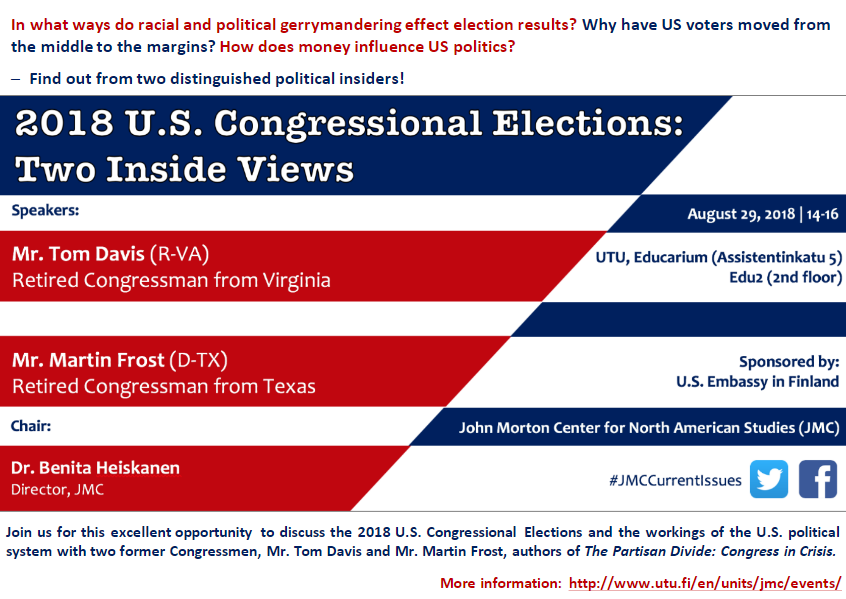 Tom Davis (R-VA) is the director of Federal Government Affairs at Deloitte and rector at George Mason University.  He served 14 years in Congress after several years at the local level in Fairfax County, VA.  In 1998 and 2000, he served as the chairman of the National Republican Congressional Committee.

Martin Frost (D-TX) currently holds the position of vice president of the U.S. Association of Former Members of Congress and sits as the chairman of the board of the National Endowment for Democracy.  He and Tom Davis (R-VA) wrote The Partisan Divide: Congress in Crisis.  While in Congress, Frost served on the Budget Committee and was in charge of the Democratic Congressional Campaign Committee for two election cycles, adding 14 more Democrats to Congress.

Sponsored by the U.S. Embassy in Finland.

The American Presidency and the 2018 Congressional Elections

The U.S. Congressional Elections are fast approaching. How will the midterms shape the future of the United States? Can the Democrats challenge the Trump White House? Will the record number of female candidates steer the conversation?

Organized in collaboration with the UTU department of Political Science.

Seminar with Dr. Phil Tiemeyer (Associate Professor of History at Kansas State University and Fulbright Fellow at the University of Belgrade in Serbia) on methodological, theoretical, and ethical questions related to LGBTQ history, gender studies, and American studies.

Writing Queer History: What We Can Learn from the Male Flight Attendant 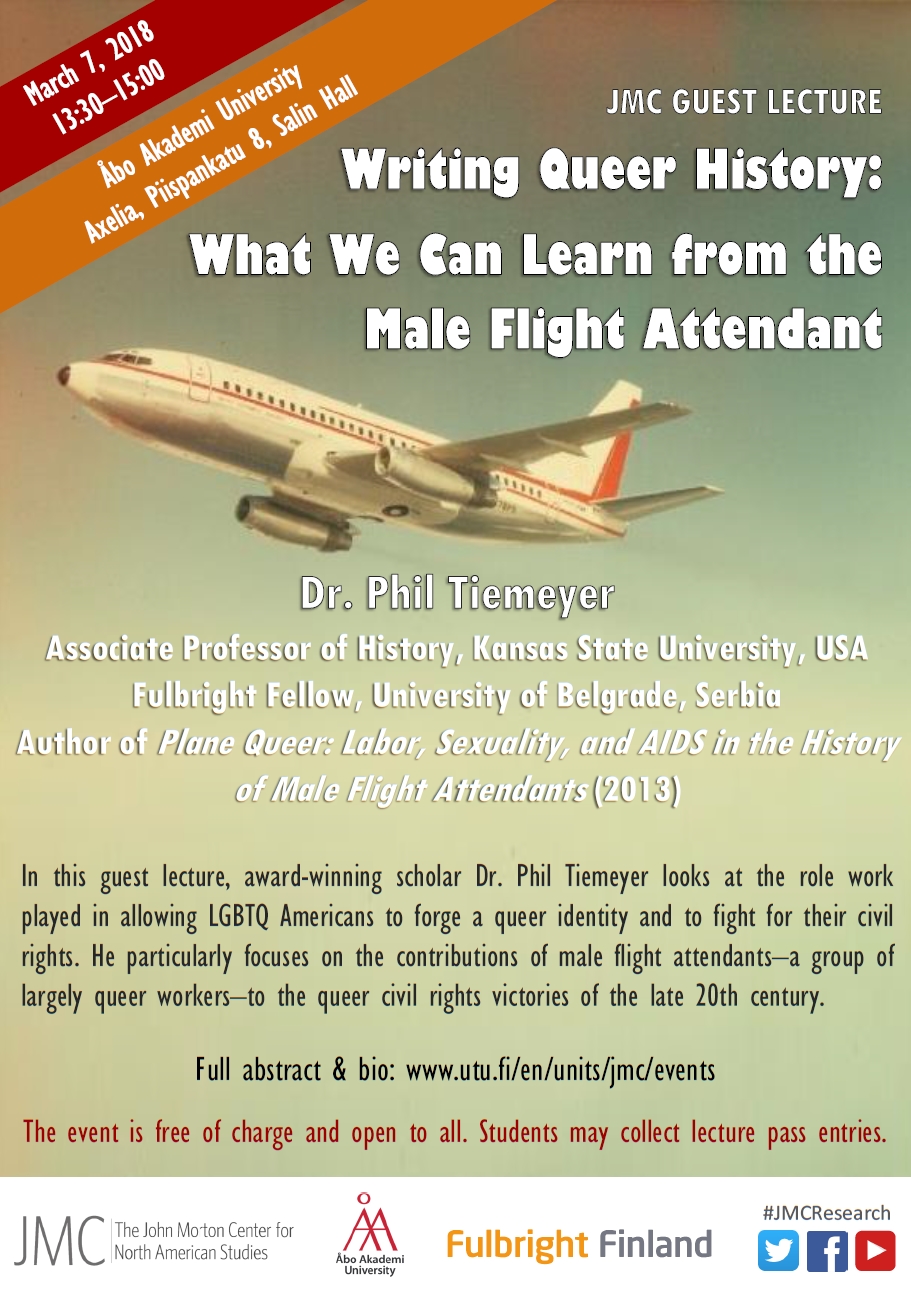 In this guest lecture, award-winning scholar Dr. Phil Timeyer looks at the role work played in allowing LGBTQ Americans to forge a queer identity and to fight for their civil rights. He particularly focuses on the contributions of male flight attendants – a group of largely queer workers – to the queer civil rights victories of the late 20th century. 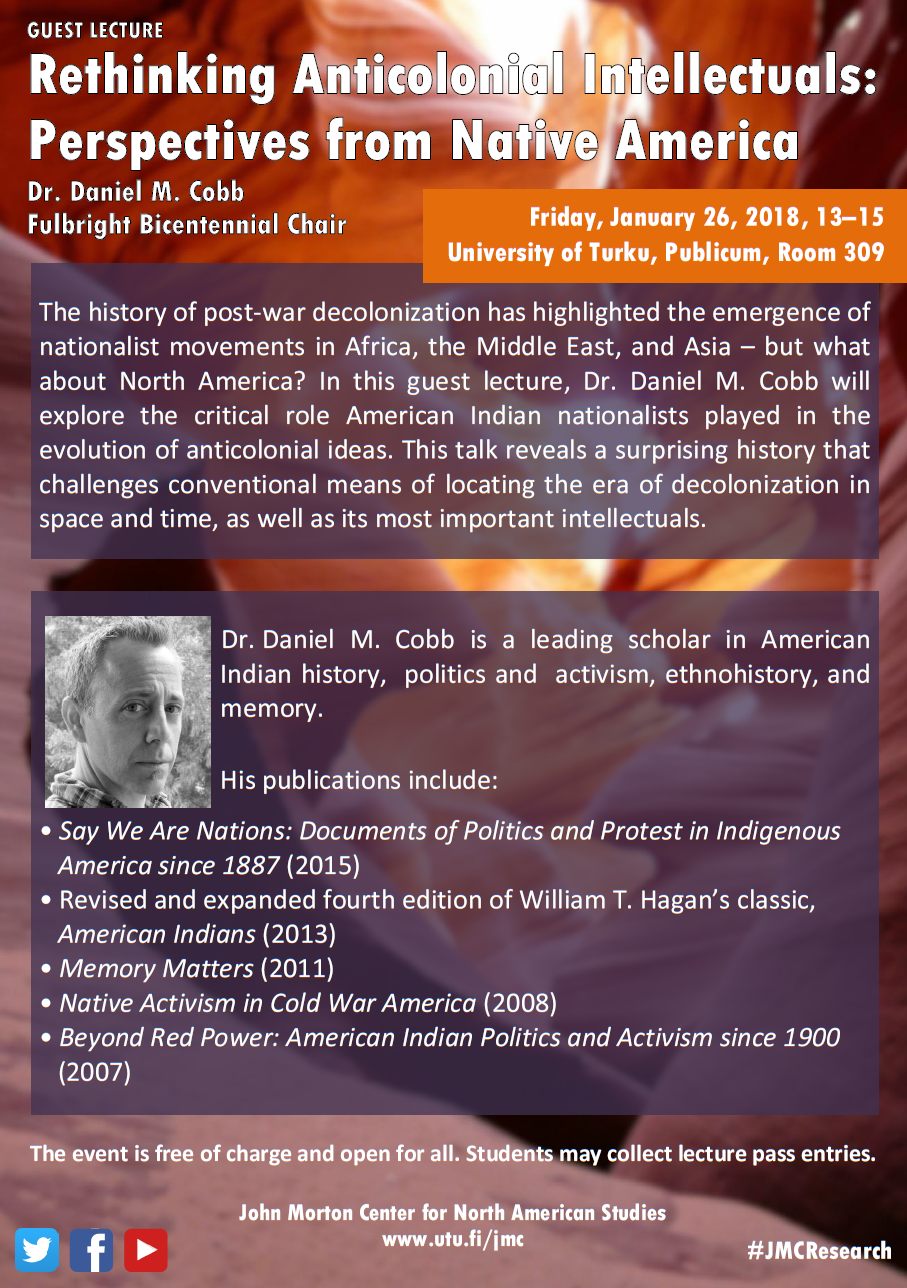