How can a doctoral candidate summarise their doctoral dissertation research in just three minutes? Come and see for yourself at the Three Minute Thesis final of the University of Turku! Ten competitors try to win over both the judges and the audience with their presentation. The event is held in English and it is open to everyone. 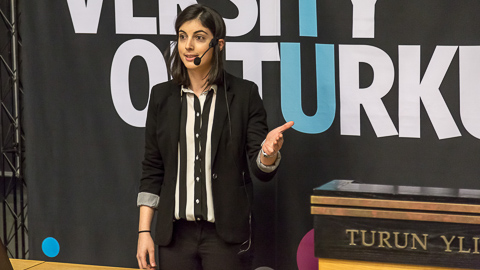 ​The first Three Minute Thesis (3MT) competition of the University of Turku was organised a year ago and now it is held for the second time.

​Originally, the Three Minute Thesis competition was created at the University of Queensland in Australia in 2008. Today, approximately 350 universities around the world organise the 3MT competition each year.

– Presenting your research in 180 seconds is excellent practice, and it develops your skills for the future. Last year’s competition attracted a great deal of audience and they spurred the competitors to great performances, says one of the judges, Vice Rector Riitta Pyykkö.

The presentations are held in English. University Lecturer in Chemistry Veli-Matti Vesterinen opens the event with the theme Why science is boring, but in reality science can take a rather interesting turn in the hands of Vesterinen who belongs to the Big Science Bang team that popularises science with youtube videos. After Vesterinen, the 3MT final begins.

The 3MT final is held at 2pm on Thursday, 8 March at the OP-sali hall of Turku School of Economics (Rehtoripellonkatu 3). The event is open for everyone and free of charge. As coffee and tea will be served during the break, please register for the event by 1 March at  www.utu.fi/register-to-3MT-audience.

The judges award the two best presentations. The audience also has a chance to choose their favourite. The winner picked by the judges will compete in the Coimbra Group’s international 3MT competition with a video filmed at the final.