Half a century ago, the Boreal owl was the most numerous predatory bird in Eurasian boreal forests. However, during the last twenty years the Boreal owl population has diminished noticeably. This is because of the vanishing old-growth boreal forests, explains the new book by researchers of the University of Turku. 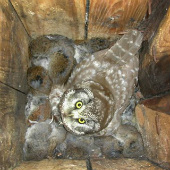 At the moment, the owl population decreases annually by two per cent. The worst case scenario is that this leads to the Boreal owls’extinction in 30 years’ time. The information is presented in the new book by the Professor Erkki Korpimäki from the Ecology Department of the University of Turku and Docent Harri Hakkarainen. The book called The Boreal Owl concentrates on the ecology, behaviour and conservation of the Boreal owl. It is published by the prestigious Cambridge University Press.

The decreasing of the Boreal owl population and the reasons for it, are based on long term research knowledge which has been collected for over 40 years in Southern Ostrobothnia in an area of over 1000 square kilometers. In addition, bird-watchers and ringers all over Finland have collected data from almost all areas covered by local bird clubs.

The Boreal owl is in fact the first vertebrate species which has helped to prove that the individual’s survival and lifetime reproductive success are the greater the more the habitat has old-growth or middle aged forests. Old forests offer more hiding places from larger birds of prey, like the Ural owl and the Northern goshawk, and they also offer more food, especially during the winter. However, climate change seems to have no noticeable effect on the Boreal owl population’s reproductive success.

Lifetime’s Work in a Book

Professor Erkki Korpimäki started to study the Boreal owl’s reproductive success when he was just 14 years old. It was then when he made his first nest boxes suitable for Boreal owls and took them into the forest with his friends. His doctoral thesis about the ecology of the Boreal owl in changing feeding circumstances was finished in 1981.
Docent Harri Hakkarainen joined the research group in 1989. He then started collecting material for his doctoral thesis about the reproductive investment and the size difference of the female parent. The thesis was finished in 1994. Over the years, the material collected about the Boreal owl population has generated about 60 published international articles and five doctoral theses.
The newly published book collects the results of unique long-term research. The focus is especially on the interactions of the Boreal owl with its prey species, reproduction success and survival, the inter-sexual tug-of-war over parental care and how the owls are able to adapt to the changing numbers of their main food source, the vole. Good and bad vole years follow each other predictably. Astonishingly, the owls are able to time their reproduction effort according to the periodic changes in the vole population.
The book also tells us which factors regulate the Boreal owl population and how the forests should be managed so that the population of the Boreal owl, one of the main enemies of the forest destroying voles, would stay viable. The book contains 0, 96 kg of information about the way of life and behavior of the Boreal owl.
>> Additional infromation about the publication
Text: HA
Translation: SM
Photograph: EK and HH
Created 10.12.2012 | Updated 14.09.2018