HIIT Releases Endorphins in the Brain

Finnish researchers at the University of Turku have revealed that exercise-induced endorphin release in the brain depends on the intensity of the exercise. Endorphin release induced by exercise may be an important mechanism which affects exercise motivation and maintenance of regular physical activity.

​A recent study conducted at Turku PET Centre, University of Turku, shows that the popular high-intensity interval training (HIIT) leads to endorphin release in the brain, which might alleviate the physical and emotional stress caused by the high-intensity exercise. A less demanding, traditional one-hour aerobic exercise does not cause similar endorphin release.

In the study, HIIT significantly increased the release of endorphins and other opioid peptides in the brain areas controlling pain and emotions. In addition, HIIT induced negative feelings in the test subjects, which was associated with higher endorphin release. Although one-hour aerobic exercise did not induce significant release of endorphins, it increased pleasurable feelings and euphoria, which correlated with endorphin release.

− Our results highlight that exercise intensity affects endorphin release and that the brain opioid system is involved in both positive and negative feelings caused by physical exercise performed at different intensities, says Doctoral Candidate Tiina Saanijoki from Turku PET Centre.

− Exercise-induced endorphin release may be an important mechanism which supports exercise motivation and maintenance of regular exercise. At moderate training intensities, the pleasurable sensations caused by the possible release of endorphins may promote habitual exercise. At very high exercise intensities the release of endorphins appears to be linked to increased negative feelings and pain, and may be needed to manage the emotionally and physically demanding challenge. However, such negative feelings may discourage further exercise. Exercise intensity should be taken into account when starting new exercise routines, explains Saanijoki.

The study was conducted using positron emission tomography (PET). The participants were injected with a radioactive compound which binds to their brain’s opioid receptors. Radioactivity in the brain was measured with the PET scanner in three conditions: after a 60-min aerobic moderate-intensity exercise session, after a high-intensity interval training (HIIT) session, and after rest.

>> The findings were published on 19 July 2017 in the scientific Neuropsychopharmacology journal. 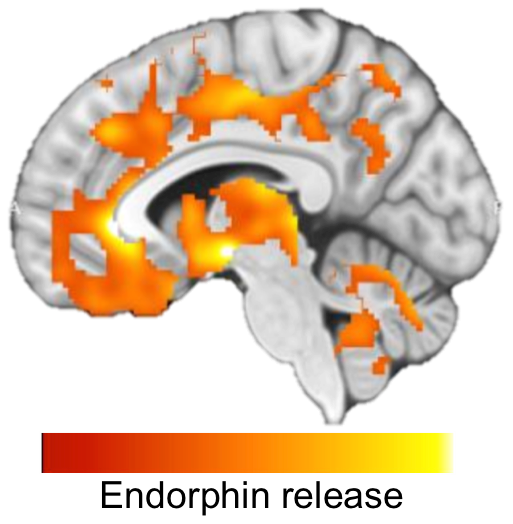