New Possibilities for the Treatment of Poor Prognosis Breast Cancer

A recent study declared that the TLR9 protein expressed by cancer cells has an effect on the prognosis of triple-negative breast cancer. The new discovery creates possibilities for the development of much needed cancer therapy and medication. In the future, it may benefit hundreds of Finnish women. 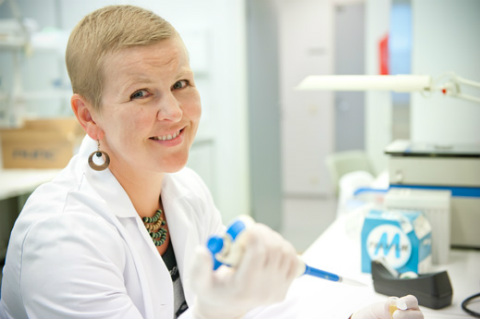 ​Researchers Johanna Tuomela and Jouko Sandholm from the University of Turku have been a part of a research project in which a new subtype of poor prognosis triple-negative breast cancer was identified. The research was coordinated by University of Turku’s Cell Biology Docent Katri Selander, who works mainly as an Assistant Professor in the Division of Hematology and Oncology in the UAB in Alabama, USA.

- Some of the patients with this type of cancer make a full recovery while others deteriorate quickly. Before it wasn’t possible to identify which group the patient falls into, says researcher Johanna Tuomela from PET Centre.

The results of this study give light to the matter. The cells of the breast cancer subtype found in the study express low levels or none of the TLR9 protein which is a part of our immune system and causes inflammation reaction when activated. In triple-negative cancers low levels of TLR9 are related with fast spreading and poor prognosis.

Researchers indicated that this action is also connected to low oxygen concentration, because lack of oxygen in tissues may increase invasion of the triple-negative cancer cells via innate immunity. Out of all breast cancers, about 9% are these types of tumors.

- The result is significant, because the lack of TLR9 has never before been connected to the spreading of breast cancer. The result might benefit annually over 400 Finnish women, says Tuomela.

Presently, poor prognosis triple-negative breast cancer can be treated only with surgery, chemotherapy and radiation therapy. Because aggressive cancer easily forms metastases, there is a real demand for medication. Tuomela, Sandholm, Selander, Professor Pirkko Härkönen from the subject of Cell Biology and Anatomy of the University of Turku’s and Turku PET Centre are already proceeding with further studies, which aim to gain more information about the spreading mechanisms of the triple-negative cancer.

- The project has already received funding and we are applying for more. The development of new pharmaceuticals is a very long process and it isn’t certain that the end result will be an effective drug. The results of this study have nonetheless opened a possibility for this, Tuomela says.

The results were published in Breast Cancer Research and Treatment