Massive stars die young and explode as bright supernovae. Astronomers can use these explosions to study how fast galaxies made stars earlier in the Universe's history. 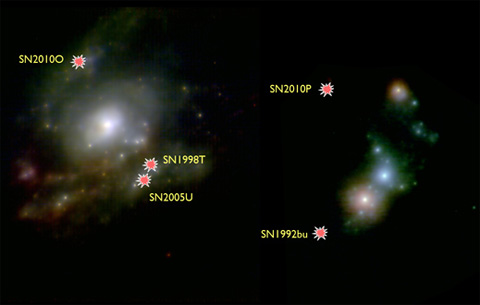 ​International team of astronomers lead by Seppo Mattila from FINCA has now determined how many supernovae have remained undiscovered because they are hidden by interstellar dust in their host galaxies.

The team which has members from most continents, and also included Erkki Kankare from Tuorla Observatory, studied core-collapse supernovae in two kinds of galaxies: the "normal" ones, and those that are heavily obscured by dust, the so-called luminous and ultraluminous infrared galaxies (known respectively as LIRGs and ULIRGs). In the nearby Universe, most of the star-formation goes on in "normal" galaxies, while earlier in the history of the Universe most of it occurred in LIRGs and ULIRGs.

The new results published in Astrophysical Journal ( doi:10.1088/0004-637X/756/2/111/) indicate that in the near-by universe one in five supernovae are missed and the number increases to two in five for the distant Universe. In LIRGs and ULIRGs the number of missed supernovae could be as high as four in five. These results enable accurate determination of the supernova rate, and thus also the starformation rate, in the distant Universe.