A happy welcoming ceremony was organised in the City of Rauma on Thursday for students who arrived from Namibia in February to study a three-year Bachelor's degree. 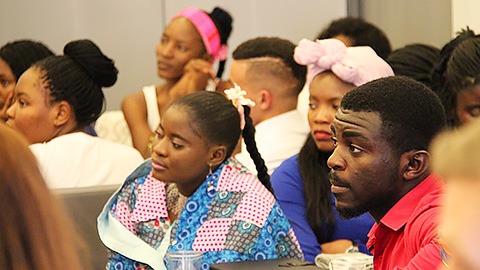 ​Teacher education bought by the NSFAF foundation was launched at the Department of Teacher Education of the University of Turku in February 2017. Altogether 24 Namibian future teachers study the first two years in Rauma and the third year in their home country. This is the first Bachelor's degree education realised as transnational education in Finland.

​The long journey of the students from southern Africa to the North continues the story of Namibia and Finland. Namibia became independent 27 years ago, and President Martti Ahtisaari had a significant role in the peace negotiations that lead to the independence.

The Ambassador of Namibia in Finland Bonny Haufiku, who arrived to the ceremony as an invited guest from Helsinki, knows events that go even further back in history. His grandmother's life changed completely with the help of Finns.

– Finnish missionaries taught my grandmother to read. That is the first step in education. But education is not only about reading and writing, it is much more than that.

Education is a Foundation for Everything

– When the aim is to develop the state, it is important to learn the means of production. That is what Africa wants, noted Ambassador Haufiku.
The economic development of Namibia is well under way, but there is a desire for an even better future. There is plenty of sunshine, land and natural resources in Namibia. Solar energy, electricity, food and various products can be produced with these resources, but more knowledge and technical skills need to be acquired first.
– First and foremost, all this requires expertise. The first steps towards it are taken with the help of teachers. In everything, there is always need for competent teachers first. 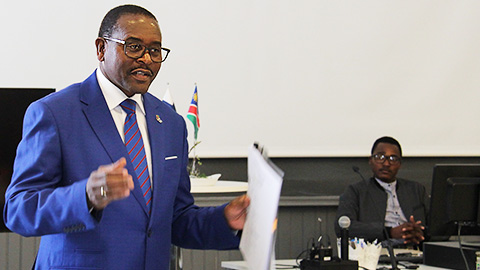 According to Ambassador Bonny Haufiku, education is the most valuable and far-reaching help that a developing country and its people can receive.

Rector Kalervo Väänänen from the University of Turku shares this view. He noted that education was a significant factor in Finland's development from one of the poorest countries in Europe to one of the most successful ones.

– In Finland, we believe in education. It is the greatest power that can change a society, and every child deserves the best possible education. When a state can accomplish that, the country is headed towards even better equality and prosperity, said Rector Väänänen at the ceremony.

Students had clearly internalised the same and saw education as a tool with which the world can be changed.

– It is true on so many different levels that it is hard to even begin to describe. For example, modern technology has not been created from scratch but by brainwork, pondered one of the future teachers, Elias Mbanze.

Daily Life and Celebration in Rauma

– Not long ago, this was just a distant dream for us. Many people in both Finland and Namibia worked hard for organising this education and made it possible. Now, we are here, ready to study and learn, said Elias Mbanze happily.
– And some day, we will be ready to go back home, to develop the Namibian education system and the entire country.
Before that, there is a great deal of studying ahead, and adjusting to a new and different culture. During the first month, the students have become familiar with, for example, living according to schedules that are tightly run by the clock, and riding a bike.

Dora Puhakka from the Finnish-Namibian Society (pictured on the left) and Ambassador Haufiku gave students several good tips for living abroad and promised to give them all the possible support.

The students were extremely thankful for Finland, the University of Turku and people in Rauma for the possibility to live and study here. Dean of the Faculty of Education Marja Vauras thanked the students and reminded them that for Finns, meeting Namibians is a privilege and also a possibility to learn.

This became evident during the celebration, for which students had prepared a variety of great performances including speeches, poetry, music and dance. The performances created a beautiful and vivid picture of Namibia, its varied nature, and people.

– The sun in the Namibian flag describes us as people as well, said teacher student Unique Esingue smiling.

Dora Puhakka, who has grown up in both Namibian and Finnish cultures, told the students that the most "Namibian" day in Finland is the May 1st ('vappu').

–Then, you should head outside to sing and dance – you will feel at home!

Rector Väänänen welcomed the new students but warned them about the possibility of colder winters and gave everyone a pair of wool socks donated by the University. A warm thank you and a pair of wool socks were also presented to the Ambassador of Namibia in Finland Bonny Haufiku.

The great humour in the speeches of the Ambassador and students made the entire audience laugh out loud many times. Elias Mbanze pictured with fellow students.

– Many people claim they are unique, but I am truly that, said student Unique Esingue while entertaining the audience while they were waiting for a dance performance.

There are strong and unique cultures in different Namibian regions, into which the students' performances offered small glimpses.

>> Read more: Namibia Buys Teacher Education from the Rauma Unit of the University of Turku