The Success Story of the Baltic Sea Region Is Written Together

The region's future as a significant European economic zone can be achieved with hard work and a shared vision. The future of the region was under scope at the 25th Anniversary Seminar of the Pan-European Institute at the University of Turku. 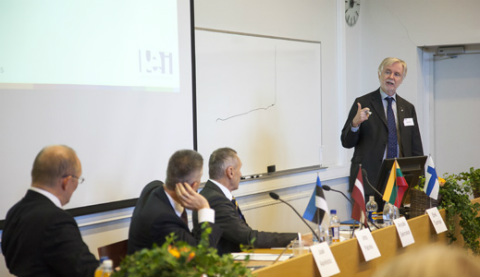 ​According to Finland's Minister for Foreign Affairs Erkki Tuomioja it is crucial
that the future of the Region is created in a sustainable way.​

​‒ It is certain that our societies need to be more flexible in order to cope with change. In the future, the one who makes it isn't the strongest or the wisest but the one who is the most capable of change, stated the Director of the Pan-European Institute, Professor Kari Liuhto.

According to Professor Liuhto, in the midst of globalisation and urbanisation, megacities and mega regions are the true future high-flyers.

‒ We have to ask does the Baltic Sea Region take part in this development. And further, can St. Petersburg, the fourth largest city in Europe, take the lead in this?

Liuhto noted that the Region must also prepare itself for rapid and unsuspected changes.

‒ We have to consider the possibility that changes in the energy market, for example, will cause social pressure in some of the Region's countries. We cannot predict how much time we have before the on-going changes start to determine the future. For us, the best way to tell the future is to co-create it.

Ministers from the Baltic Sea Region countries were invited to speak at the seminar. They gave keynotes regarding energy, traffic, economy, security, and environment in the Region.
Finland's Minister for Foreign Affairs, Mr. Erkki Tuomioja outlined the general future of the Region. He stressed that the Region has a number of strengths, which it can utilize in the hunt for a bright future.
‒ Perhaps somewhat paradoxically, one of the most important ones is our expertise in the environmental field. Even if our mare nostrum is one of the most polluted seas in the world, we still have ‒ owing to extensive scientific research conducted for decades ‒ all the reason to believe that the Baltic Sea can still be cleaned.
Tuomioja added that the process is not always painless. As an example of this, he mentioned the directive for lower sulphur emissions in the Baltic Sea.
‒ It will inevitably increase the transport costs, but this is the price we have to pay to ensure sustainable marine traffic in our waters. Fulfilling this requirement will create new business opportunities for our companies, and we will be able to market our technologies and know-how as similar requirements will be adopted elsewhere.

Finland's Minister for Foreign Affairs also emphasised the need to make the internal market in the Region more effective in the process of aiming for a successful and prosperous future.
‒ As is well-known, there are still many shortcomings in the functioning of the internal market of the EU. Nothing prevents us, however, from making sure that it works in the Baltic Sea context. To make the Region truly the home market for our SME's, we need to continue to develop the infrastructure, which links us across the Region.
In addition to Minister Tuomioja, Lithuania's Minister of Energy Arvydas Sekmokas, Latvia's Minister of Defence Artis Pabriks, and Estonia's Minister of Education and Research Jaak Aaviksoo spoke at the seminar and took part in the lively discussion.
The Pan-European Institute is a unit of Turku School of Economics at the University of Turku that specialises in the European economy and development in the Baltic Sea Region. The Director of PEI, Professor Kari Liuhto is also the Director of Centrum Balticum, Finland's policy think tank on Baltic Sea regional issues.
Text: Taru Suhonen
Photo: Hanna Oksanen
Created 10.12.2012 | Updated 07.06.2018