Secrets of the Oval Office: Time Traveling in the Cockpit of American History

Organized in collaboration with the International Institute for Popular Culture (IIPC).

What if They Are All Us? Star Trek and the Universalization of the American Imaginary

Star Trek, originally broadcast on NBC from 1966 to 1969, was a ratings failure as originally broadcast. Its low viewership made it vulnerable to cancellation at the end of each of its seasons. Given its status as a low-rated television series, there was no reason to suppose the Star Trek franchise would go on to become a global pop culture powerhouse. Whatever its beginning, however, the franchise now spans five television series, twelve motion pictures, uncountable numbers of novels and magazines, the entire “Trekkie/Trekker” fan convention phenomenon and even dictionaries of “Trek” languages like Klingon — in which it is possible to enact William Shakespeare’s “Hamlet” if one desires to do so. The continuing popularity of Star Trek derives from its linkage of American political cultural values to a global — indeed a galactic — scale. Star Trek offers its fans the promise that the future will be global, ethical, rights respecting, and democratic. Humanity's future will, in other words, be the best parts of the “American way”: American culture made manifest on a galactic scale.

Chair
Dr. Kari Kallioniemi works as Researcher and Director in the Kone Foundation project “Thatcherism, Popular Culture and the 1980s.” He is also the Vice-Director of the International Institute for Popular Culture (IIPC) at the University of Turku.

Speakers
Dr. Austin Lane Crothers is Professor of Politics and Government at Illinois State University. He is currently serving as the Fulbright Bicentennial Chair in American Studies at the University of Helsinki. His main fields of interest are American political culture and political leadership, and his broad research agenda focuses on the political and social sources and effects of the globalization of American popular culture. The author of seven books and 20 other research articles and chapters, he taught at the University of Alabama-Huntsville and Eastern Washington University before coming to Illinois State University in 1994. He is married to Dr. Martha C. Horst. They have two children, Austin, 4, and Gigi, 2.

Dr. Martha Callison Horst has taught music theory and history at San Francisco State University, University of California, Davis, and East Carolina University. She is currently an Associate Professor in Theory & Composition at Illinois State University. Recent accolades include winner of the Alea III International Composition Competition, winner of the Rebecca Clarke International Composition Competition, and residencies at the MacDowell Colony. In addition to her compositional activities, she is an accomplished singer, having performed regularly with the Emmy and Grammy-award winning San Francisco Symphony Chorus.

The event is organized in collaboration with the International Institute for Popular Culture (IIPC). 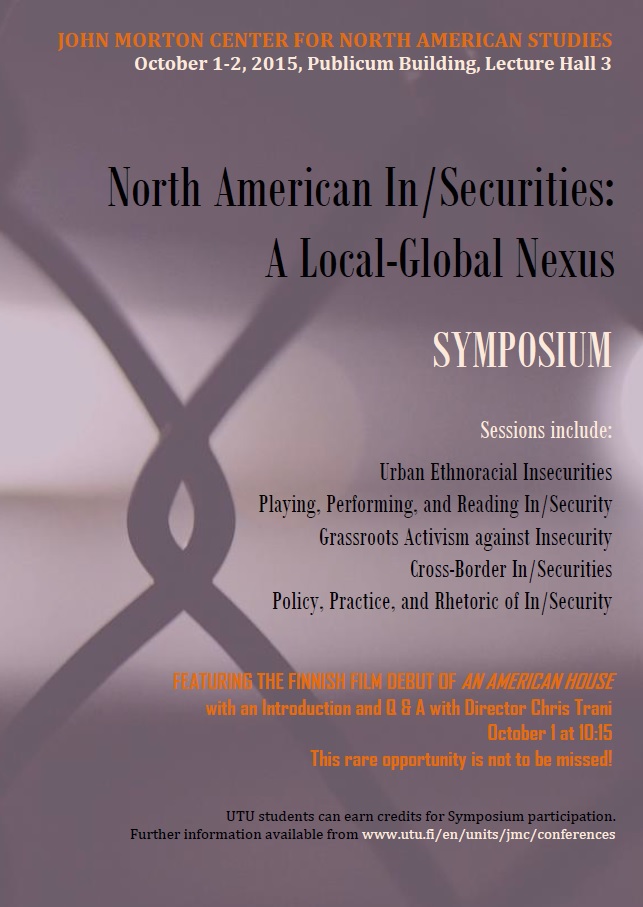 The symposium brings together scholars to discuss 21st century security concerns in the United States, Canada, and Mexico, and their global implications. In particular, we will explore three tensions that characterize contemporary security concerns:

Underscoring the multiple scales at which security issues are explicated, experienced, and represented, the symposium points to their far-reaching geographic, political, socioeconomic, military, and cultural ramifications.

Dr. Vesa Vares, Professor of Contemporary History, University of Turku:
“America as a Stranger and a Friend: The Image of the United States in Finland during the 20th Century”

Racial riots! Immigration reform! The legacy of Obama! These important questions divide the United States today and will have great consequences for the nation’s future. The JMC’s “Current Issues” Seminar #9 brings together three international scholars to discuss these debates and their ramifications.

The event is free and open to the public. Organized in collaboration with Fulbright Center Finland.

The event is free and open to the public. Organized in collaboration with the Department of Cultural History.

Detective as Outside in American Crime Fiction

Una Bergmane, Ph.D. Candidate: “Congressional reactions toward the disintegration of the USSR: the case of the Baltic States 1989-1991”
Paola Raunio, Ph.D.: “The US and the Iranian Nuclear Monster”

Organized in collaboration with Fulbright Center Finland and the Department of Contemporary History.