The guidelines and principles of the U.S. foreign policy have raised discussion under the Donald Trump administration. Whether U.S., under the "America first" policy, is withdrawing or turning more towards isolationism? President Trump has claimed that the US should and could not be the "world police" anymore. Establishment Republicans and neoconservatives alike have criticized the foreign policy of the current administration. The neoconservatives are remembered particularly in connection with the George W. Bush's administration and the policy of emphasizing using U.S power - military, political and economic - to protect U.S. interests. The lecture will examine contesting views on the American foreign policy. It will present continuities and discontinuities in U.S. foreign policy under George W. Bush and Donald J. Trump administrations.

Jesús Velasco is the Joe and Teresa Long Endowed Chair in Social Sciences at Tarleton State University. He earned his Ph.D. in Political Sciences at University of Texas, Austin. He is a former visiting scholar at the Woodrow Wilson Center, at the Weatherhead Center for International Affairs and the Rockefeller Center for Latin American Studies both at Harvard University. Velasco has authored two books with Rodolfo de la Garza. Bridging the Border: Transforming Mexico-US Relation (Boulder, Rowman and Littlefield, 1997); and Neoconservatives in US Foreign Policy Under Ronald Reagan and George W. Bush: Voices Behind the Throne (Baltimore, Johns Hopkins University Press and The Wilson Center, 2010). A title "Foreign Views of the United States and of the 2016 Presidential election" is forthcoming (Lexington Books, Spring 2018).

Is the World Order in Flux? Challenges to Transnational Political Conventions 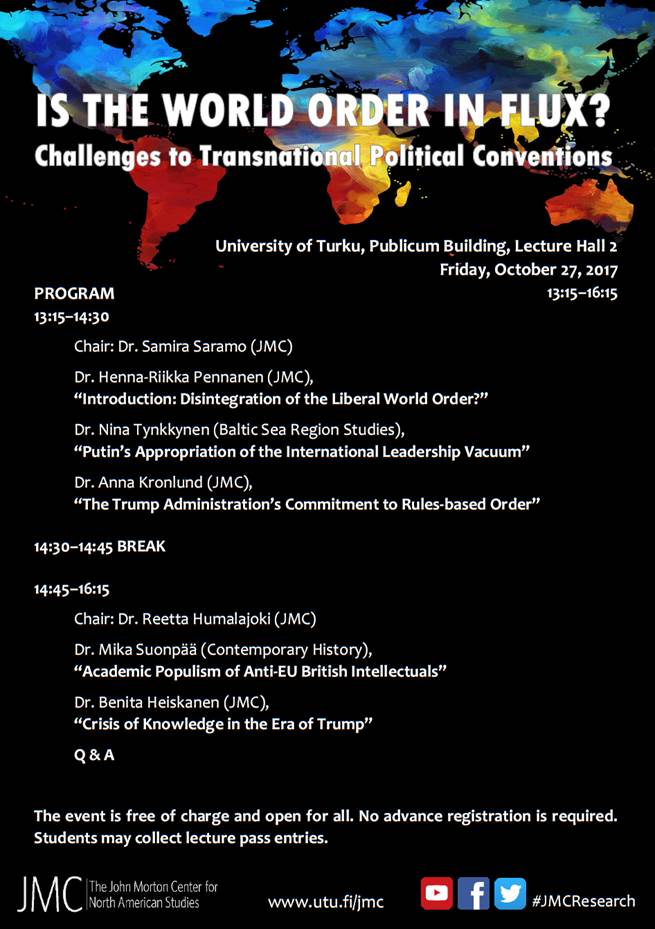 Cross-currents in American Defense Strategy and Their Implications for Europe

Since his inauguration in January 2017, President Donald Trump has done little to demonstrate a deep, personal interest in the details of US defense strategy, policy, and budget issues. With some notable exceptions, he has not repeated the most bellicose and irresponsible statements of his campaign. He has relished his role as Commander-in-chief, but to date he seems to prefer a selective use of force.

Still, despite considerable turmoil in the White House, the vast US defense establishment must “soldier on,” and simultaneously manage military operations in Iraq, Syria, and Afghanistan; reinforce US posture and capabilities in Europe in response to Russia; and maintain and improve readiness to deal with those and other real or potential threats, such as North Korea. The conceptual framework for these efforts should emerge in a new National Defense Strategy and work to prepare this document is well underway.  This lecture will cover: potential changes or continuities likely to emerge from the new strategy; how these might affect US defense capabilities; and the implications of a new strategy and new capabilities for the transatlantic defense relationship.

Leo Michel is Visiting Fellow, Finnish Institute of International Affairs (Helsinki), and Non-resident Fellow, Atlantic Council (Washington.)   He retired from the Defense Department in 2015, where he served as Distinguished Research Fellow at National Defense University and held positions in the Office of the Secretary of Defense, including Director for NATO Policy, Director for Non-Nuclear Arms Control, and Deputy US Representative, US-Russia Bilateral Consultative Commission. He previously served in the CIA and US Navy, worked as a congressional staffer, and as a reporter for French media. He holds degrees from Johns Hopkins School for Advanced International Studies and Princeton University.

The Eagle Meets the Dragon: Shifts and Tensions in U.S.–East Asia Relations

“Make Japan Great Again – Japan and its Alliance with the US during the Abe Administration”
Dr. Bart Gaens, Finnish Institute of International Affairs

“Transforming and Containing – on the History of American Engagement with China”
Prof. Lauri Paltemaa, University of Turku 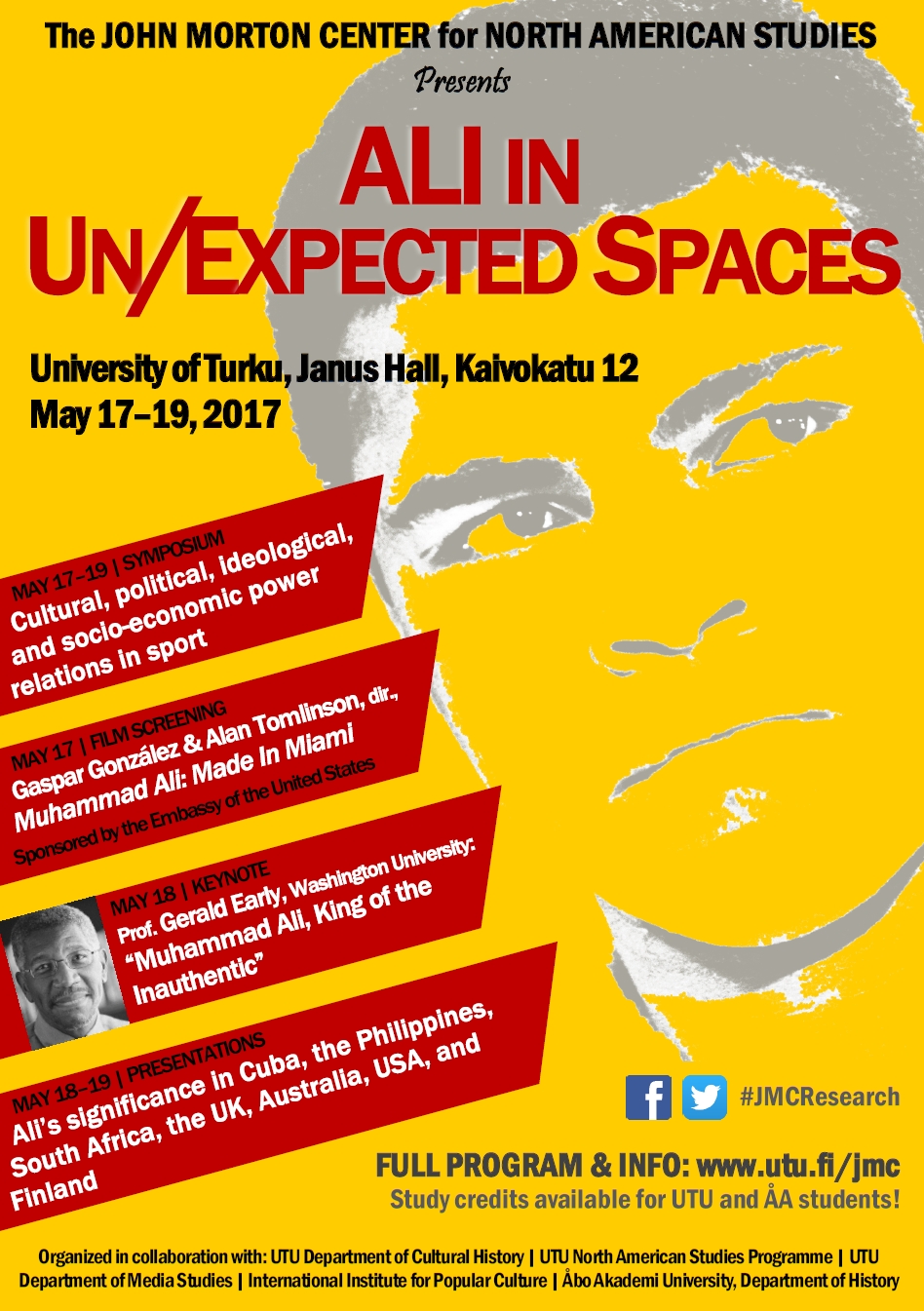 ​War/Peace documentary (2017) film is re-introducing radical student activists from the late 60s. Ex-leaders of The Weather Underground movement Bill Ayers and Bernardine Dohrn are controversial characters in the US based on public opinion. The film will serve as a historical reminder of activism and asks a question; how can change be possible if peaceful demonstration is not effective and violence only brings more violence?

​We're inviting you to see the film and hear Ayers and Dohrn talk about their activism in the 70s and how it comapers to the current activisim in the US. The audience will have an opportunity to ask filmmakers and Ayers and Dohrn questions.
​The event is hosted by the JMC and IIPC (International Institute for Popular Culture). The event is free and open to all.

The JMC with the Embassy of Canada to Finland invite you to participate in National Canadian Film Day 150. National Canadian Film Day is a massive one-day celebration of Canadian cinema in honour of Canada's sesquicentennial. As an international event partner, we will be screening the acclaimed 2016 documentary ​Angry Inuk. The film will be followed by discussion. The event is free and open to all.