An invention of Turku Clinical Biomaterials Centre and Stick Tech LTD, everX Posterior, which is a filling composite for back teeth, has received its fifth international award within a year. 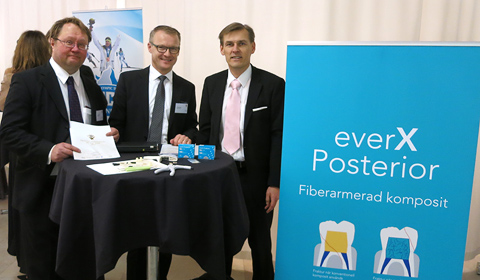 ​Swedish Institute for Quality, Finnish Quality Association and four other institutes that promote quality granted the Quality Innovation of the Year 2013 award. The product won the award in the category for the smallest businesses. It also received the Innovation of Innovations award which was contended by all the nominees.

The product had already received four awards in 2013: it received the novelty product award in Cologne from the International Dental Schau, the Prix de l’Innovation award from the Association Dentaire Française, the German Henry Schein award and the Top of Progodent award from the Czech Republic.

The innovation was developed in Turku and is based on fibreglass plastic technology, which makes the filling composite stronger than other filling plastics.

– Hundreds of millions of patients can benefit from the invention when their amalgam fillings deteriorate and are replaced with new ones, says Professor Pekka Vallittu.

The Quality Innovation of the Year 2013 certificates, which were signed by President Sauli Niinistö, were handed to the winners by the Speaker of the Parliament of Sweden, Per Westerberg, in Stockholm on January 20, 2014. The award that went to the Stick Tech LTD was received by CEO Jyrki Kurokallio and the inventors Professor Pekka Vallittu and Head of the Laboratory Lippo Lassila from the University of Turku.