The winner of the University’s Three Minute Thesis Competition (3MT) 2018 was Khalil Shahramian. He will represent the University of Turku in the international 3MT competition organised by the Coimbra Group. 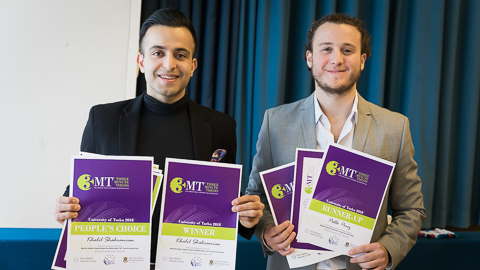 ​Khalil Shahramian (left) was the favourite of both the judges and the audience. Pablo Perez came in second.

​The Three Minute Thesis competition was organised at the University for the second time on 8 March 2018. Nearly 200 people came to hear the presentations of the ten finalists whose topics ranged from patents to the utilisation of cyanobacteria and from whooping cough to brown fat.

3MT is a science communication competition developed by the University of Queensland in Australia. In the competition, doctoral candidates compete by presenting their research topic and its significance within three minutes as understandably as possible.

This year’s winner is Khalil Shahramian from the Finnish Doctoral Programme in Oral Sciences and he was also the audience’s favourite winning the People’s Choice prize. His presentation was titled Bioactive Coatings to Improve Implant-Gum Relationship & Soft Tissue Attachment Issues. Mr. Sahramian studies how dental implants can be improved with better coatings.

The runner-up was Pablo Perez from the Doctoral Programme in Biology, Geography and Geology with his presentation Mapping Amazonia Using Machine Learning and Satellite Imagery. 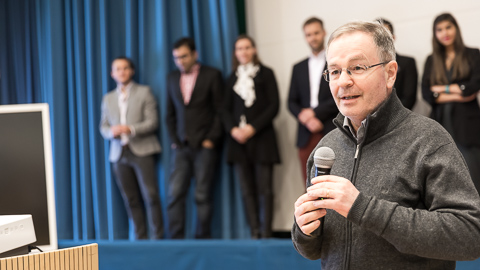 Before announcing the winner, Director of the Centre of Language and Communication Studies and one of the judges Michael Nelson revealed the eight judging criteria: how understandable and interesting the presentation was, did it make the audience want to hear more about the topic, was the competitor enthusiastic about their topic and did their body language reveal it, what kind of a contact did the competitor make with their audience, how large a portion of the presentation involved the doctoral candidate’s own research, and did the one slide that was allowed support the presentation.

– The winning presentation was about an important topic that involves millions of people. It was an engaging, lively and enthusiastic performance that combined humour and science, said Vice Rector Riitta Pyykkö who was also one of the judges.

The judges commended all the ten finalists for their presentations.