Professor David M. Lee from the Physics and Astronomy department of Texas A&M University collaborates with the experts of the University of Turku. 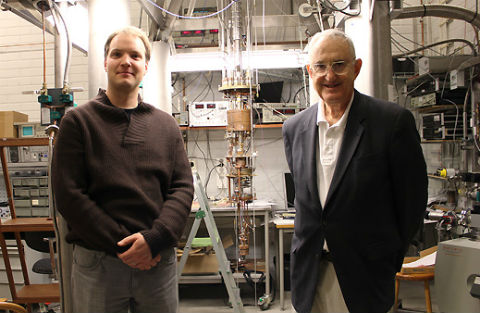 ​PhD Student Vainio and Professor Lee in the physics lab, where the magic happens.​

​Professor Lee´s remarkable career has included winning of the Nobel Prize for Physics in 1996. It was awarded for their discovery of superfluidity in helium-3. A superfluid is a state of matter in which the substance looks like a normal liquid, but behaves like a fluid with zero viscosity. It flows without friction and can penetrate through tiniest of holes.

Lee has long collaborated with the Department of Physics and Astronomy of the University of Turku and especially with Senior Researcher Sergey Vasiliev. Last time Lee visited Turku, because he was the opponent of PhD Student Otto Vainio. Vainio´s dissertation explored the wave movement of the spins of the electrons of hydrogen.

Lee has been full of zest for science all his life.

- When I was a child, I read an astrophysics book about the mysterious universe. Of course, I didn´t understand all of it, but it was very inspiring, Lee remembers.

Lee started his career during the Cold War, when United States and Russia measured their strengths. Sputnik started the race to space and got Lee interested in a project, where they studied free radicals, a promising rocket fuel.

- My first office and laboratory were situated in the far end of the campus. They put me there, because they thought, I could blow the whole place up, Lee tells.

Nowadays, Professor Lee and his Texas group are researching how the energy released from recombination to molecules could be implemented in solid matter. The researchers of the University of Turku on the other hand are studying quantum gas of hydrogen, which was the subject of Professor Lee’s studies during the ´80s.

Come to think of it, the science of physics is related to so many things in our world, its surroundings and development. Lee and Vainio explain the similar patterns of things.

- The universe is expanding and we know this by measuring the frequency of the light coming from distant stars. The method, by the way, is exactly the same used in polices’ radars detecting speeding cars.

Do You Too Have What It Takes?

Lee knows that some of the ingredients of success come inside and some are external.

Perhaps he has tips for those, who want to become the future Nobel Winners?

- If you are thinking about the prizes, you are in the wrong place. You have to love, what you do. That’s the only way. There is nothing like being in the lab. The excitement is in the discovery and the prizes come on top of that, if they come, Lee says with a smile.

- It is so rewarding to understand something totally new, Vainio completes.