The rotational rate of one of the most massive black holes in the universe has now been measured very accurately by the Department of Physics and Astronomy of the University of Turku and the Finnish Centre for Astronomy with ESO together with an international team of astronomers. It is the first time that the rotational rate and mass of a supermassive black hole has been measured with a closer accuracy than one percent. 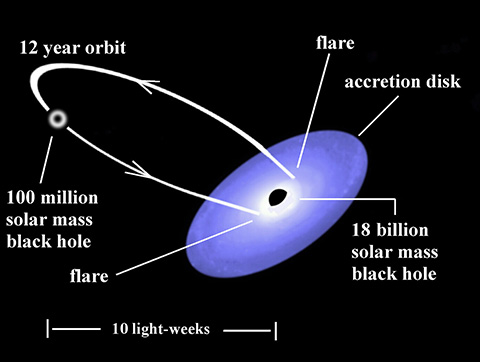 ​The supermassive black hole is orbited by a smaller black hole and the researchers have been able to deduce the characteristics of the larger one by observing its smaller companion.

​The supermassive black hole powers a quasar called OJ287 which lies about 3.5 billion light years away from Earth. The rotational rate of this massive black hole is one third of the maximum spin rate allowed in General Relativity. Its mass is 18 billion times larger than the mass of the sun.

– The measurements were possible due to observing the movement of a smaller black hole orbiting the large one, which enabled us to study its characteristics. The rotation of the black hole causes an ellipsis to the orbit that can be measured, says Professor Mauri Valtonen who coordinated the study.

This is the first time that the rotation rate and mass of any black hole has been measured with a closer accuracy than one percent. In earlier studies, the inaccuracy has always been more than 10 percent. The results were published on 10 March in The Astrophysical Journal Letters.

– This information is more than just a curiosity: it can be used to deduct whether the General Theory of Relativity presented by Einstein a hundred years ago is the only way to describe gravity, states Valtonen.

– In a few years, the equipment developed in South Africa, Australia and India can measure also the waves sent by OJ287. Before that, we have to be content with the light and X-radiation signals which we have used in this study, says Valtonen.

18 March 1915 has often been called the birthday of Einstein’s Theory of Relativity.

– Exactly a century later, a radiation outburst began in OJ287 which has led to a new confirmation of the Theory of Relativity. Therefore, the outburst in OJ287 and the observation of gravitational waves on 14 September 2015 were a great present for the hundred-year-old Theory of Relativity, says Valtonen.

The measured black hole binary was detected by the Department of Physics and Astronomy of the University of Turku at the Tuorla Observatory at the beginning of 1980s, but it took over thirty years to clock its rotation rate.

During the different decades, several scientists, such as Aimo Sillanpää, Harry Lehto and Seppo Mikkola, have had an important role in this central research project of the Observatory.

The observations leading to the accurate spin measurement have been made due to the collaboration of a number of optical telescopes in Japan, South Korea, India, Turkey, Greece, Finland, Poland, Germany, UK, Spain, USA and Mexico. The effort, led by Staszek Zola of Poland, involved close to 100 astronomers from these countries. Interestingly, a number of key participants were amateur astronomers who operate their own telescopes. Valtonen’s team that the spinning binary black hole model include theoretical astrophysicist  A. Gopakumar from TIFR, India, and Italian X-Ray astronomer Stefano Ciprini who obtained and analysed the X-ray data.