Once again a team from the University of Turku participated in the Willem C. Vis International Commercial Arbitration Moot. Organized for the 20th time, the Vis Moot gathered 296 teams from around the world for extremely competitive rounds of written and oral advocacy with final victory claimed by the City University of Hong Kong. The Uni Turku Vis Team, with students Juho Hellgren, Mirka Kuisma, Petr Timura, Lisa Werle, Mikita Areshko and Veera Salokannel, returned home with an honorary mention for their excellent respondent's memorandum. 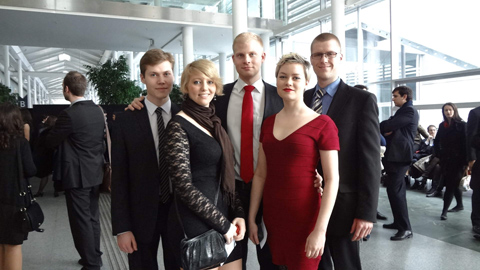 Each year, the Vis Moot draws together thousands of law students and legal professionals to argue over hot issues of arbitration and sales law. The competition begins in October with participants drafting memoranda discussing in detail the issues at stake for both claimant and respondent. This is followed by oral hearings in front of panels of legal professionals over the week before Easter in Vienna.

The Vis Moot is an outstanding way of learning advocacy skills, arbitration and sales law in a challenging and international atmosphere. The law firms of Borenius, Castren & Snellman, Hannes Snellman, and Roschier provide support by organizing a workshop for the participants, while "premoots" organized around the world help train students in the art of oral advocacy prior to the actual showdown.
​
Created 15.04.2013 | Updated 23.05.2013