History of the University of Turku

Turku is an old university town. Queen Christina of Sweden established the third university of the Sweden-Finland kingdom, the Royal Academy of Turku, in 1640.

Turku is an old university town. Queen Christina of Sweden established the third university of the Sweden-Finland kingdom, the Royal Academy of Turku, in 1640.
In the 1820s, three major figures of Finnish language, culture and literature, J.V. Snellman, Elias Lönnrot and J.L. Runeberg, studied at the Royal Academy of Turku. The Finnish Cultural Foundation donated a statue commemorating these great men and it was completed in 1968. The Kolme vekkulia statue by sculptor Harry Kivijärvi is located by the University’s current Main Building.

When Finland gained its independence, the only university in the country was the Swedish-language University of Helsinki. Educated Finns thought that it is important that a Finnish-language university is also founded. An extensive fund-raising was organised and altogether 22,040 donations were received from the Finnish people.

The University of Turku was established in 1920. At the time, the University consisted of the Faculty of Humanities and the Faculty of Mathematics and Natural Sciences. Turku Finnish University Society purchased the Phoenix hotel, built in 1878 right by the Market Square. The University operated from the building for 36 years, even though at first it was meant only as a temporary solution.

The Faculty of Medicine was founded in 1943 for the needs of a nation at war.

At the end of the 1940s, the University received a significant bequest. The Johnsson-Joutsen brothers from Turku had made their fortune as prospectors in Klondike, Yukon.

The brothers had no heirs and Karl Fredrik Joutsen bequeathed his house and the remaining gold to the University of Turku. With the donation, the University was able to expand from the limited facilities at the Phoenix building to the current University Hill. The University’s gold treasure includes, for example, gold watches and nuggets from Klondike, the largest of which weighs 240g.

University was nationalised in the 70s

The private University of Turku was at first a small university. It was nationalised in 1974. The greatest expansion of the University happened in the 60s but the University keeps on growing still today. 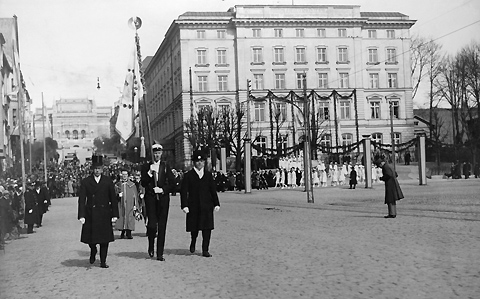 The University's inauguration was celebrated with a ceremonial conferment in May 1927. The Academic Procession proceeds by the Market Square. At the background is the former Phoenix hotel building where the University started its operations. 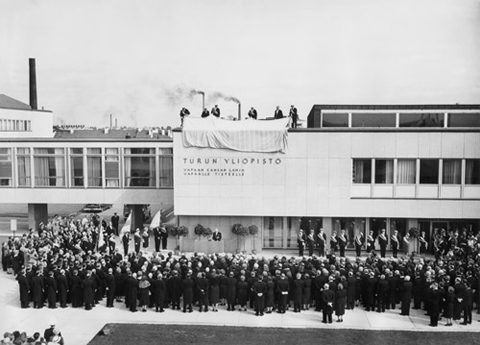 The inauguration of the new University buildings on 23 May 1959. The inscription on the wall of the Main Building, the University's motto “University of Turku - From a free people to free science”, is being revealed. 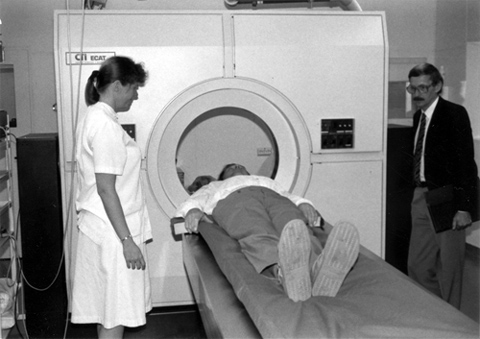 Already in the 1970s, the particle accelerator acquired by the universities in Turku and the successful research in radiochemistry led to a revolutionary new imaging technique, positron-emission tomography. The first PET machine was acquired in june 1988.