Historic Voyage to Mercury Has Begun – High Technology from Turku aboard

The BepiColombo orbiters were launched into space on Saturday, 20 October 2018 from Europe’s Spaceport in Kourou, French Guiana. Journeying to the innermost and smallest planet of our Solar System, the orbiters are carrying Finnish high technology with them. Head of Space Research Laboratory at the University of Turku, Professor Rami Vainio has been responsible for the particle detector of the SIXS instrument aboard the Bepi orbiter.

​Mercury is the least explored terrestrial planet in the Solar System. Even though the planet has been known ever since prehistory, so far, it has been investigated only little. Previously, only two orbiters have travelled close to the planet.

European and Japanese space agencies have been preparing their joint endeavour to Mercury for almost 20 years. The voyage to Mercury is long and challenging, and, at the destination, a fascinating hot world covered with craters awaits.

– Sending an orbiter to Mercury is difficult because it’s located so close to the Sun. The thermal design of the orbiter must be executed well to endure large variations of temperatures, says Professor of Space Physics at the University of Turku Rami Vainio who has been working on the project for well over ten years.

Moreover, the radiological protection of the orbiters has been highly invested in.

– The radiation doses at Mercury’s distance from the Sun might rise over ten times higher compared with those at the Earth’s distance. This is a highly challenging environment for electronics. 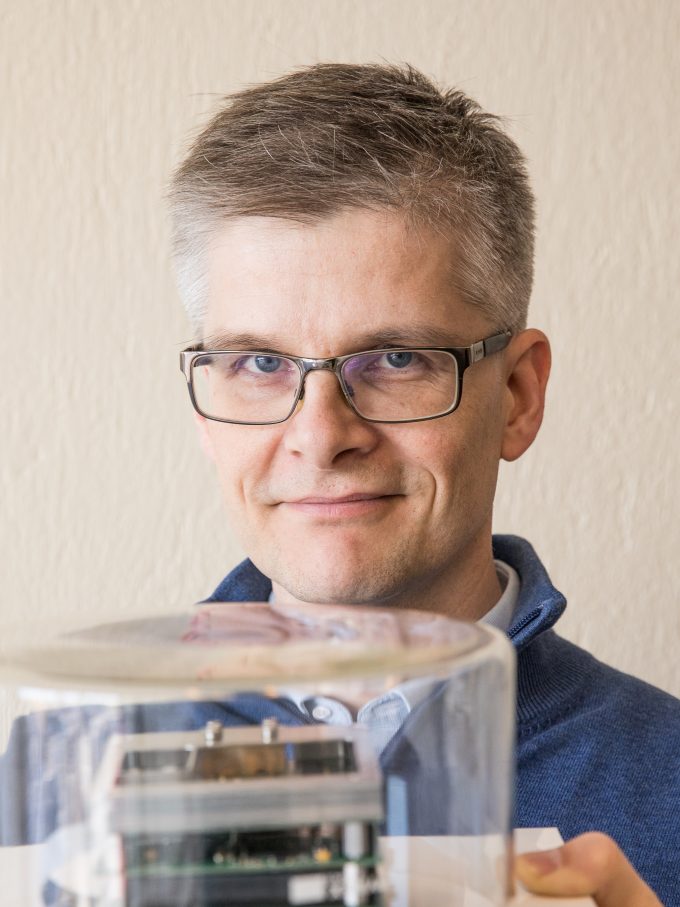 Rami Vainio and the RADMON radiation monitor of the first Finnish spacecraft Aalto-1 developed on the basis of the solutions adapted in the particle detector of SIXS.

Double the Number of Observations

This is the first time that Mercury is being explored with two orbiters.

Both Bepi and Mio revolve around Mercury’s poles on elliptic orbits. At the closest point, they both travel as close as only 400 kilometres away from Mercury. Two orbiters enable exploring the investigated phenomena from different perspectives.

– Bepi keeps relatively close to Mercury, but Mio’s orbit reaches as far as over 11,000 kilometres away from the planet, where the orbiter also detects solar wind.

The orbiters are most beneficial in exploring the rapid changes in Mercury’s magnetosphere driven by the changing conditions of solar wind.

– The previous orbiter projects have not had the opportunity to investigate the issue with two measuring spots and so to explore the cause and effect relations at this level.

BepiColombo was launched into space aboard an Ariane 5 carrier rocket. Image: ESA-CNES-Arianespace.

BepiColombo is a highly ambitious project involving scientists from around the world, a dozen of whom are from Finland.

– The main function of the SIXS instrument is to measure the X-ray and particle radiation streaming away from the Sun and hitting Mercury’s surface producing X-ray area emission that is measured by the MIXS instrument, says Vainio.

The X-radiation emitted by the planet provides a fingerprint of the physical and chemical composition of the surface.

– By comparing the measurements of MIXS and SIXS, the surface composition of the planet can be traced with previously unseen accuracy, continues Vainio.

Besides planetary science, the SIXS instrument can also be utilised to explore the particle radiation and X-radiation produced by solar flares on Mercury.

– Since the planet revolves around the Sun at the closest at a distance of only a third of the one compared to the Earth, we will be able to make considerably more detailed observations than we would in space closer to the Earth. Together with the Solar Orbiter by ESA that will be launched in February 2020 and the Parker Solar Probe by NASA, Bepi and Mio will provide a lot of new information on the radiation processes of the Sun and the activity of our star.

BepiColombo was launched into space from Kourou aboard an Ariane 5 carrier rocket. Together with the transfer module, the orbiters will orbit in the inner Solar System for almost seven years before Mercury will be able to capture the orbiters onto its permanent orbit in December 2025.

For BepiColombo, a brand new type of an electric source of power has been developed that enables thousands of hours of thrust.

– With the help of the ion thruster, it’s possible, for example, to slow down orbital speed so that Mercury will finally capture the spacecraft onto its gravitational field without any more complex manoeuvres.

The voyage to Mercury’s orbit is long and eventful. Click to view full-sized. Image: ESA.

During the long voyage, BepiColombo’s numerous sets of measuring equipment do not remain inactive. The measuring equipment is aimed to be kept powered on whenever the ion thruster is not needed for thrusting. Important scientific measurements are being carried out particularly during the flybys of Venus and Mercury.

– Mercury will be flown by six times during the mission, and each time it is possible to carry out valuable measurements with SIXS that will help in preparing for the actual orbiting phase. Measurements carried out elsewhere during the mission provide valuable information on the particle conditions and magnetic fields of solar wind that can be combined with measurements from other solar probes for a better overview.

It is vital for the scientist groups to get to begin the analyses of the measurements already during the mission as it will last for over seven years.

– The very first results will be obtained already at the end of 2018 when equipment checks are being carried out, but the flybys of the planets which produce more data will start in 2020, says Vainio.

The University of Helsinki is in charge of Finland’s part of ESA’s BepiColombo mission. The Principal Investigator of the SIXS instrument is Docent Juhani Huovelin and Professor Rami Vainio has been responsible for the instrument’s particle detector. Professor Karri Muinonen is the other Principal Investigator of the British MIXS instrument. In addition to the University of Helsinki and the University of Turku, the Finnish Meteorological Institute has participated in the project. Altogether, there are a dozen scientists in the Finnish BepiColombo scientist group. The text is partly based on a press release text drafted by Associate Professor Emilia Kilpua and Juhani Huovelin.