Astro-polarimetry is an important method in astronomical observation, aimed at detecting and measuring polarisation of light emitted, reflected, or scattered by astronomical objects such as asteroids, planets, nebulae, stars and exoplanets.  The astro-polamiter built with the lead of a research group from the University of Turku made its first observations in July 2019 at the Nordic Optical Telescope on the Canary Islands. In October 2019, the University of Turku becomes the joint owner of the Telescope.

In space, the degree and direction of polarisation depends on spatial distribution and density of matter that reflects or scatters light, the properties of light-scattering particles, and physical conditions in stellar and planetary atmospheres. An astro-polarimeter is an instrument that allows astronomers to obtain this information by studying the polarisation of various celestial objects.

– By studying the polarisation of light, we can obtain information on the structure and composition of stellar and planetary atmospheres as well as on dust and gas disks surrounding young stars, out of which new planets will form. When observing high-density objects, such as white dwarfs, neutron stars and black holes, we can study how matter behaves in extremely strong gravitational and magnetic fields, says Senior Researcher, Docent Andrei Berdyugin from the University of Turku.

– The first observations with the instrument were made in July 2019 at the Nordic Optical Telescope at La Palma. During two nights, Dipol-UF measured polarisation from a number of stars with an accuracy better than one per hundred thousand in the blue, green and red parts of spectrum. High accuracy is needed so we can differentiate the weaker polarisation signal of an exoplanet from that of the star it’s orbiting, for instance. Because of the instrument’s high sensitivity, we can also study the interstellar magnetic field in proximity of the Sun, says Berdyugin.

The instrument is equipped with three high-speed ANDOR EM CCD cameras which are capable of recording images of the sky with the impressive rate of 56 frames per second. The instrument employs three industrial grade mini-PCs and special optical layout to record images in polarised light simultaneously in three colours.

– The process of observations with Dipol-UF is highly automated and all observations can in principle also be done remotely from a few thousand kilometres away, describes Berdyugin.

The observatory situated at the height of 2.4 kilometres above sea level at La Palma is one of the best places in the world for astronomical observation. The great location, high-quality optics, and extensive array of instruments make the Nordic Optical Telescope a highly efficient observatory. 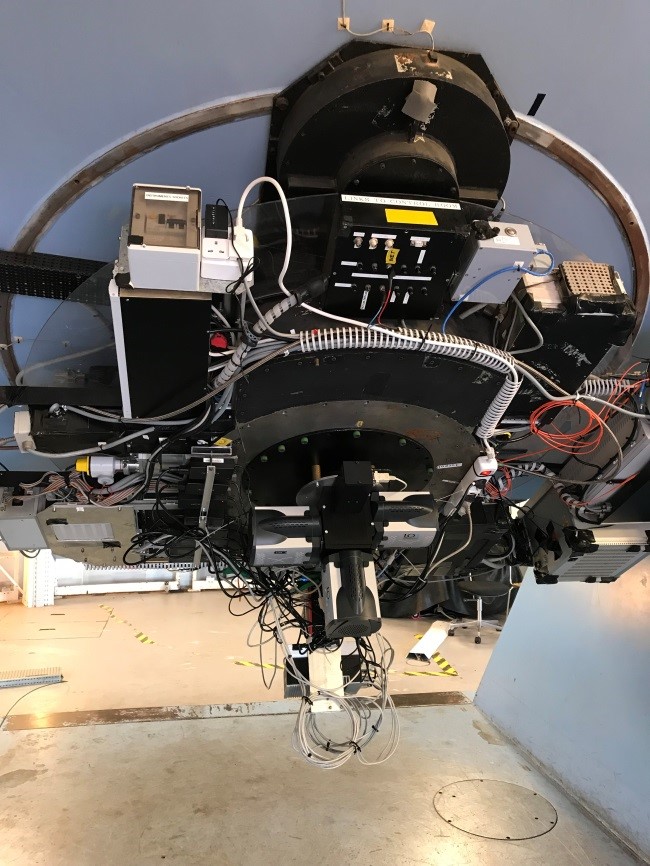 Dipol-UF mounted at the bottom of the 2.56 m Nordic Optical Telescope.

Normal image of the area of stellar sky: https://apps.utu.fi/media/kuvat/tahtitaivas.JPG

The same area of sky as seen by the polarimeter: https://apps.utu.fi/media/kuvat/tahtitaivas_polarimetri.JPG (A special optical element, a plane-parallel calcite plate, inserted into the optical path splits each stellar image into two orthogonally polarised ones. By measuring the relative intensities of these images, researchers can measure the polarisation of stellar light.)