Researchers at the University of Turku have developed a synthetic material based on the natural hackmanite mineral which produces broad spectrum white light in lamps. The hackmanite created by the Inorganic Materials Chemistry research group is a low-cost material emitting luminescence closer to sunlight than that of the currently used lanthanides. 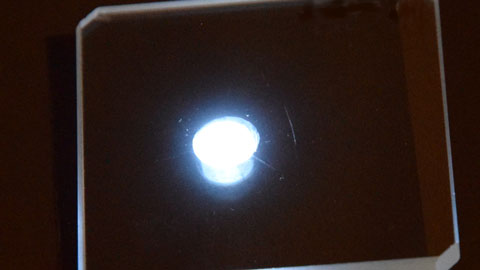 ​The hackmanite developed by the researchers.

​The hackmanite developed by the research group contains only highly abundant and non-toxic elements. Therefore, hackmanite has low production costs and does not produce hazardous waste or contain health risks.

– The lower cost of the material is also a great asset in applications for diagnostics, as the lanthanides that are currently in use are expensive. Because of its persistent luminescence, hackmanite does not require expensive time-resolved spectrometers to measure luminescence, says Docent Mika Lastusaari from the University of Turku.

He believes that hackmanite can also have applications in point-of-care diagnostics because it is excitable with sunlight.

However, the use of lanthanides is problematic. On the one hand, they are expensive and their price can vary a great deal and, on the other, they do not produce the same broad spectrum that comes from the Sun. White light is produced with lanthanides by mixing three narrow spectrum primary colours, i.e. red, green and blue, and therefore things look different in their light than in the sunshine.

– The hackmanite we have developed can be used in ordinary lamps as a single component phosphor to produce natural white light. As a bonus, hackmanite lamps continue to glow even after a power failure, thus being suitable for exit and emergency signs.

Hackmanite materials have excellent stability in water and the research group has shown that it has easily detectable photoluminescence even in nanomolar concentrations.

– We have also tested the material's application in diagnostics: we demonstrated that the material's persistent luminescence can be used in authenticating spices and testing for counterfeit foods. The tests were conducted together with the Detection Technology Group of the Department of Chemistry.

In addition, the persistent luminescence mechanism of the materials was studied in co-operation with the University's Department of Physics, the Instrumentation and Instrument Centre of the Department of Chemistry, and the Laboratory of Electron Microscopy. In addition, the Ångström Laboratory at the Uppsala University and the University of São Paulo were of great assistance in the research.

The research article was published in the journal Advanced Functional Materials.

University Communications
Faculty of Science and Engineering
Department of Chemistry