Radio observations made by Metsähovi, Finland’s only astronomical radio observatory, and Caltech's Owens Valley Radio Observatory (OVRO) in California have revealed that radiation from the remote PKS 2131-021 quasar is subject to periodic variation. Researchers at the University of Turku participated in the analysis of the observational data.

Quasars are distant active galaxies that radiate brightly because the supermassive black hole in the centre of them helps them to generate energy. This radiation can be detected in several wavelength ranges, including radio waves.

The radio waves originate in a jet that shoots out at near the speed of light from the vicinity of the black hole. If there are two mutually-orbiting supermassive black holes in the centre of the quasar, this can be verified from periodic variations in the radiation emitted.

This is why the periodicity now observed is strong evidence that PKS 2131-021 is a system of two supermassive black holes that orbit each other.

The Finnish participants in the multinational research group were Docent Merja Tornikoski and Professor Anne Lähteenmäki from Aalto University as well as Academy Research Fellow Talvikki Hovatta and Postdoctoral Researcher Yannis Liodakis from the Finnish Centre for Astronomy with ESO, a separate institution coordinated by the University of Turku.

The study made use of data from the ongoing observation programmes of Caltech's (California Institute of Technology) OVRO and Aalto University's Metsähovi Radio Observatory and also archive data from various other telescopes.

Hovatta, who has also worked at the Owens Valley Radio Observatory, explains that OVRO has been making observations since 2008, but the time series were also supplemented with archive data from observatories that have previously made observations at the same radio wavelength.

– Cases like this are not considered impossible, but proving their existence is very challenging. Quasars are located billions of light years away, and finding periodicities requires high-quality data spanning several decades, says Hovatta.

– The unique, long-term observation results of the Metsähovi Radio Observatory at Aalto University confirmed the same periodicity at a higher radio frequency. The study conducted at Metsähovi is very valuable because we have been making variability observations of some quasars for up to forty years. Long time series are essential for understanding the behaviour of quasars, explains Tornikoski, who is responsible for Metsähovi's observation programme.

– The radio emission of many quasars vary considerably, but it is very rare for them to have this striking periodicity that follows the sine curve. We quickly realized that this was a very special object of study, Hovatta continues.

Researchers surprised by the short distance between the black holes

When examining the results, the researchers were most puzzled by the fact that the periodicity stops for 20 years and then starts again exactly the same as before.

Postdoctoral Researcher Yannis Liodakis from the University of Turku focused in particular on studying the periodicity with mathematical methods.

Nature has a habit of tricking us, so the group's researchers looked at the results independently of one other and using different methods. When everyone got the same result, we knew that the periodicity was real, Liodakis says.

Previously, periodicity had been found in a long optical time series for another quasar, OJ287, which had been studied particularly by astronomers from the University of Turku for several decades. The observed cycle of OJ287 is about 12 years and its discovery required archive data spanning a whole century.

The quasar PKS 2131-021 now being studied is located much further away, but the supermassive black holes in its centre orbit one another very closely, thus the observed cycle is much shorter, at around five years.

– The distance between them is only about 50 times the size of our solar system, which at the scale of a galactic core is a very small distance. They will probably merge together around 10,000 years from now, Tornikoski says.

– It is also very interesting that such closely orbiting supermassive black holes are emitting gravitational waves. In the near future, we will hopefully be able to detect these using planned new observing facilities, Liodakis adds.

The research group was lead by Anthony Readhead, Robinson Professor of Astronomy, Emeritus, at California Institute of Technology.

The results have been published in The Astrophysical Journal Letters.

Two supermassive black holes billions of light years away from us are locked into orbiting each other. One of the black holes is shooting out a jet at near the speed of light, which shines brightly in radio waves. The orbital motion of the two black holes causes periodic variations in the emission. The black hole duo also emits gravitational waves. Animation: Caltech/R. Hurt (IPAC) 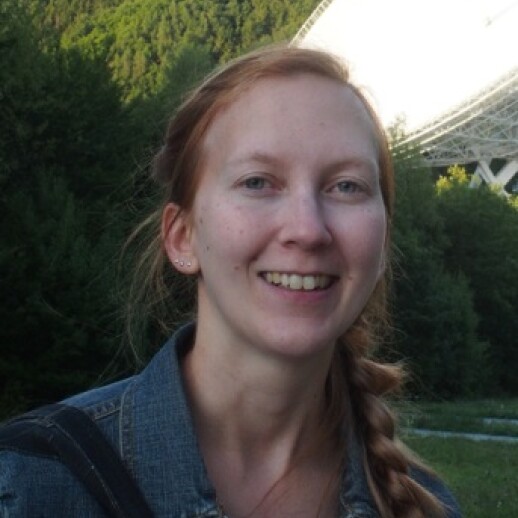