Three Professorships for Researching Biodiversity Donated to University of Turku

Mr Sakari Alhopuro, (Finnish honorary title of) lääkintöneuvos, has donated €1.5 million to the University of Turku for establishing three professorships. One of the professorships is focused on subarctic ecology, another one on the Archipelago Sea research, and the third on biodiversity. 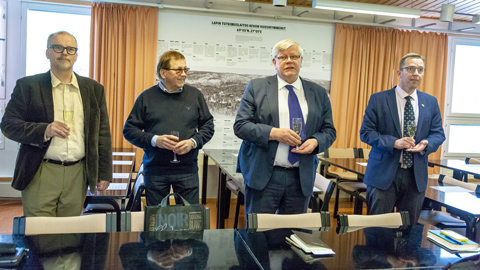 ​The donation of Mr Sakari Alhopuro and the new professorships were announced on Wednesday 28 June 2018 at Kevo Subarctic Research Institute of the University of Turku in Utsjoki, Lapland. Pictured from the left Kari Saikkonen, Sakari Alhopuro, Kalervo Väänänen, and Ilari E. Sääksjärvi.

Behind Sakari Alhopuro’s donation is both the concern about nature and wanting to support Finnish research and teaching on biodiversity.

– Understanding biodiversity creates prerequisites for the sustainable use of nature.  With the three new professorships, we can be pioneers in researching biodiversity, Väänänen says.

The new professorships will be placed at the Biodiversity Unit, which was established in January 2017. The roots for the Unit’s operations go back several decades. The Unit houses Kevo Subarctic Research Institute that celebrates its 60 years of operations this year, the over 50-year-old Archipelago Research Institute, the Zoological Museum and Herbarium that inherited their first samples from the Royal Academy of Turku, the Botanic Garden that has operated since the founding of the University, and the Aerobiology Unit.

According to Head of Unit Ilari E. Sääksjärvi, the new combination of the research interests of the three professors strengthens the research on biodiversity significantly.

– This combination of professorships creates globally unique possibilities for the University of Turku to study both biodiversity and the interaction between biodiversity and human as well as the threats within in an exceptionally diverse manner. The focus of our research is, naturally, on Finland, but our research area does extend from the subarctic area all the way to the Equator and the tropical ecosystems, Sääksjärvi says.

In his research work, the new Professor in Biodiversity Research Ilari Sääksjärvi has particularly focused on the diversity of parasitoid wasps and tropical diversity.

– As a professor, I especially want to promote genuinely multidisciplinary research on diversity. I also want to emphasise that the threats are big but there is still hope, Sääksjärvi says.

Transferring from the position of Research Professor at the Natural Resources Institute Finland, Professor of Subarctic Ecology Kari Saikkonen has focused on the effects of climate change, evolutionary ecology, ecology, and chemicalisation of environment in his research. In his new position, he especially emphasises the utilising of the possibilities of Kevo Subarctic Research Institute in extensive research on climate change.

– I want to raise awareness of the fact that we have globally an excellent position for the research on climate change in Finland. Due to the northern location of Finland and the mild environment maintained by the Gulf Stream, it is easy for us to bring up and also experimentally study the effects of climate change so that the results will be applicable to vast areas in the northern environment, Saikkonen says.

The professorship in the Archipelago Sea research strongly supports the research conducted at Seili. The professor will be appointed for the position during autumn.

In addition to research, the professorships also include education and societal interaction. 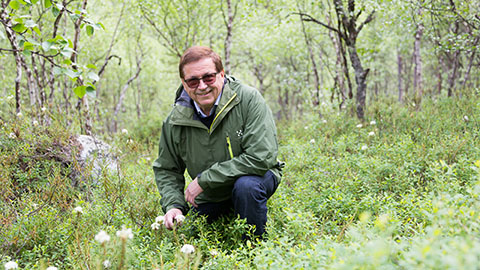 Ilari E. Sääksjärvi, who was appointed as Professor in Biodiversity Research

Kari Saikkonen, who was appointed as Professor of Subarctic Ecology