University of Turku Plants Trees in Namibia as Carbon Sinks

A collaboration project of the University of Turku and the University of Namibia, the goal of Carbon Garden is to plant a large tree area in Namibia that will be irrigated using desalinated sea water or groundwater. For the desalination process, a water purification method functioning with solar energy will be used.

The launch of the Carbon Garden project was celebrated on Friday, 10 May at the University of Namibia’s campus in Henties Bay, where the plan is tested in a smaller tree area. The launch celebration was attended by Rector of the University of Turku Kalervo Väänänen, Finnish Ambassador to Namibia Pirkko-Liisa Kyöstilä, first President of Namibia Sam S. Nujoma, and Namibia’s current Vice President Nangolo Mbumba.

To start the project, a tree area of approximately 3–4 hectares is planted into the University of Namibia’s marine biology campus area in order to test an irrigation system that utilises saline water. Developed by the Solar Water Solutions Ltd company, the water purification method utilises solar energy to produce drinkable water from saline sea water or groundwater as much as 3,500 litres an hour. The estimated costs of the water purification method’s entire life cycle are 70% smaller than those of corresponding methods.

– Namibia is one of the driest countries in the world as 22% of its surface area is desert. Inland, groundwater is mostly saline and, as such, poor domestic water. As a result of climate change, several dry areas are drying out and thus becoming uninhabitable. The goal of the project is to test to which extent a desalination method that is developed in Finland and that utilises solar energy is usable in producing domestic water in the Namibian circumstances, says Väänänen.

In autumn 2019, the University of Turku will establish the Master’s Degree Programme in Software Engineering at the University of Namibia, and its researchers and students will participate in the project by planning an automation of the irrigation system so that the system could control the irrigation of the trees independently. The salinity of Namibian soil makes long-term irrigation challenging, but this is aimed to be solved by automatic remote monitoring and steering that are based on the IoT network. The irrigation system is aimed to be optimised so that it will prevent the soil from becoming uncultivable as a result of salinisation and it will minimise the necessary amount of irrigation water.

Usually, creating carbon sinks does not involve research on forest areas, but, in this project, tree areas’ effects are investigated carefully so that the measures can be directed right. It is not yet clear where in Namibia the larger tree area will be planted and which tree species it will consist of. In collaboration, the researchers at the University of Turku and the University of Namibia investigate which areas would be ecologically and economically the most suitable for afforestation. Also, it is investigated which tree species would keep carbon dioxide absorbed for as long as possible alongside being economically profitable at the same time. 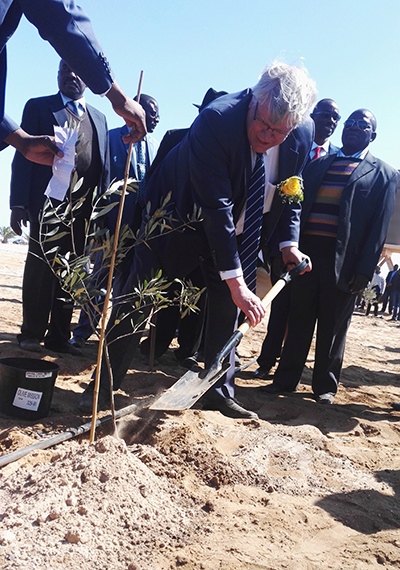 Rector of the University of Turku Kalervo Väänänen is planting the first olive trees into the University of Namibia's marine biology campus area, where a smaller tree area will be created in order to test the irrigation system.