Researchers from the University of Turku have discovered a new route that transports subcutaneously administered antibodies into lymph nodes in just a few seconds. The discovery enables targeted therapies for the immune system.

Researchers from the University of Turku, Finland, have discovered in an experimental model that a new mechanism allows the antibodies to enter the lymph node directly.

Doctoral Candidates Laura Kähäri and Ruth Fair-Mäkelä as well as Docent Kaisa Auvinen from the research group of Professor Marko Salmi discovered that antibodies pass through lymphatic endothelial cells covering the surface of the lymph node via a previously unknown mechanism.

– It was a surprise to discover subcutaneously administered antibodies in the parenchyma of the draining lymph node. The delivery of the antibody was extremely efficient. It was transported from the skin into the lymph node in just a few seconds. When using a small dose, the antibody was found only in the draining lymph node in addition to the site of administration, and nowhere else in the body, says Kähäri.

– It's exciting that the antibodies are delivered in an intact form to the targeted draining lymph node. By using this new delivery route, we can activate or inhibit inflammation locally, adds Fair-Mäkelä.

Antibodies are commonly used in treating inflammatory diseases, cancers and several other illnesses. The medication is often administered to the patient intravenously so that large quantities of the antibody spreads throughout the body via the blood circulation.

The novel discovery can have a far-reaching impact on medicine. In vaccinations, for instance, the immune response is boosted with relatively non-specific adjuvants that trigger the inflammation in the draining lymph node. On the basis of this study, the same effect could be induced by locally administered and well-characterised antibodies.

– Also immunotherapeutic checkpoint inhibitors that have revolutionised cancer treatment could be locally administered in certain cases. When compared with the current administration through the blood circulation, local subcutaneous administration would require only a fraction of the drug amount used at the moment. In addition to the cost benefits, this should eliminate the adverse effects in other parts of the body, Kähäri and Fair-Mäkelä speculate.

Both Kähäri and Fair-Mäkelä will focus their future studies especially on the different potential applications of the discovery.

The research article Transcytosis route mediates rapid delivery of intact antibodies to draining lymph nodes was published on 24 June 2019 in the renowned periodical the Journal of Clinical Investigation.

The authors of the publication are Laura Kähäri, Ruth Fair-Mäkelä, Kaisa Auvinen, Pia Rantakari, Sirpa Jalkanen, Johanna Ivaska and Marko Salmi. The study was funded by the Academy of Finland, Sigrid Juselius Foundation, and the Cancer Society of Finland. 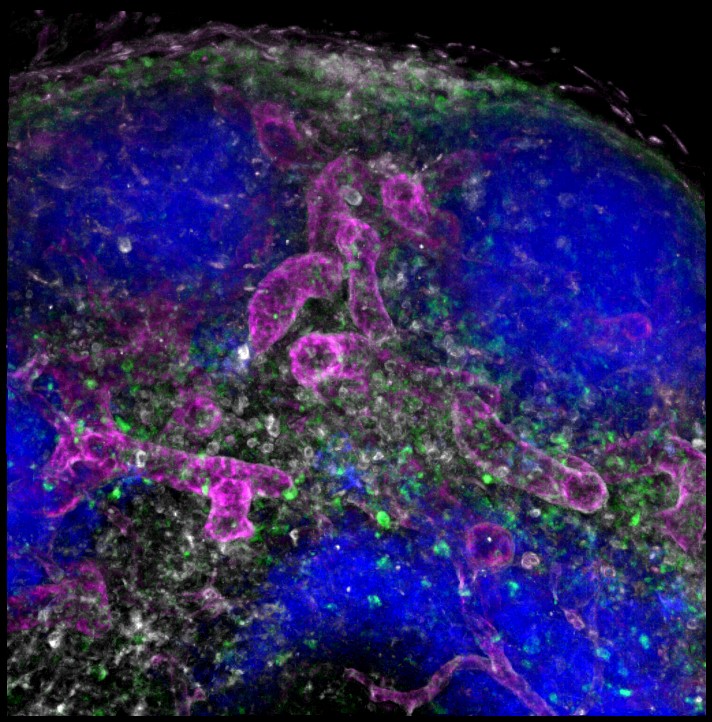 The subcutaneously administered antibodies have been transported into the lymph node and have bound to their specific targets in the blood vessels (magenta), T lymphocytes (green), B lymphocytes (blue) and antigen presenting cells (white). The outside surface of the lymph node is at the very top of the picture. Photo: Ruth Fair-Mäkelä.