In Finland, the majority of the glacial and warm interval records have been interpreted to represent only the last, Weichselian, glacial cycle that took place 11,700–119,000 years ago. Finnish researchers have now revised the crucial part of the existing stratigraphic documentation in southern Finland. The new findings show that a considerable part of the warm interval records extends further back in time than earlier thought. The new results change the established conceptions about glacial history in the area.

– One of the studied warm interval records may be circa 300,000–400,000 years old. The forests in South Finland were then composed of scots pine and Norway spruce and contained larch, fir and possibly some species related to present-day Strobus pine, says Professor of Geology Matti E. Räsänen.

A major part of the revised warm interval records is, however, attributed to the Röpersdorf-Schöningen interglacial circa 200,000 years ago. The study led by Räsänen has, for the first time, managed to reconstruct the paleogeography, vegetation and climate of this regional interglacial in Fennoscandia. During this interglacial period, the ocean levels were nearly 20m lower than today, and the Gulf of Bothnia hosted fresh water lakes surrounded by boreal pine forests.

– This is why Finland had a continental climate with warmer summers and colder winters than today. The forests were dominated by scots pine and the Siberian spruce was growing even in southern Finland. Several species that nowadays grow on the East European Plain and in Southeast Europe were growing in southern Finland, explains Räsänen.

During the Eemian interglacial 119,000–131,000 years ago, ocean levels were four to six metres higher than today and the Baltic basin was well connected to oceans.

– The dinoflagellate, silicoflagellate and diatom microfossils discovered from the stratigraphic sequences show detailed evidence of the widespread intermixing of continental fresh and marine waters within the shallow Eemian sea coastal waters, says Räsänen. 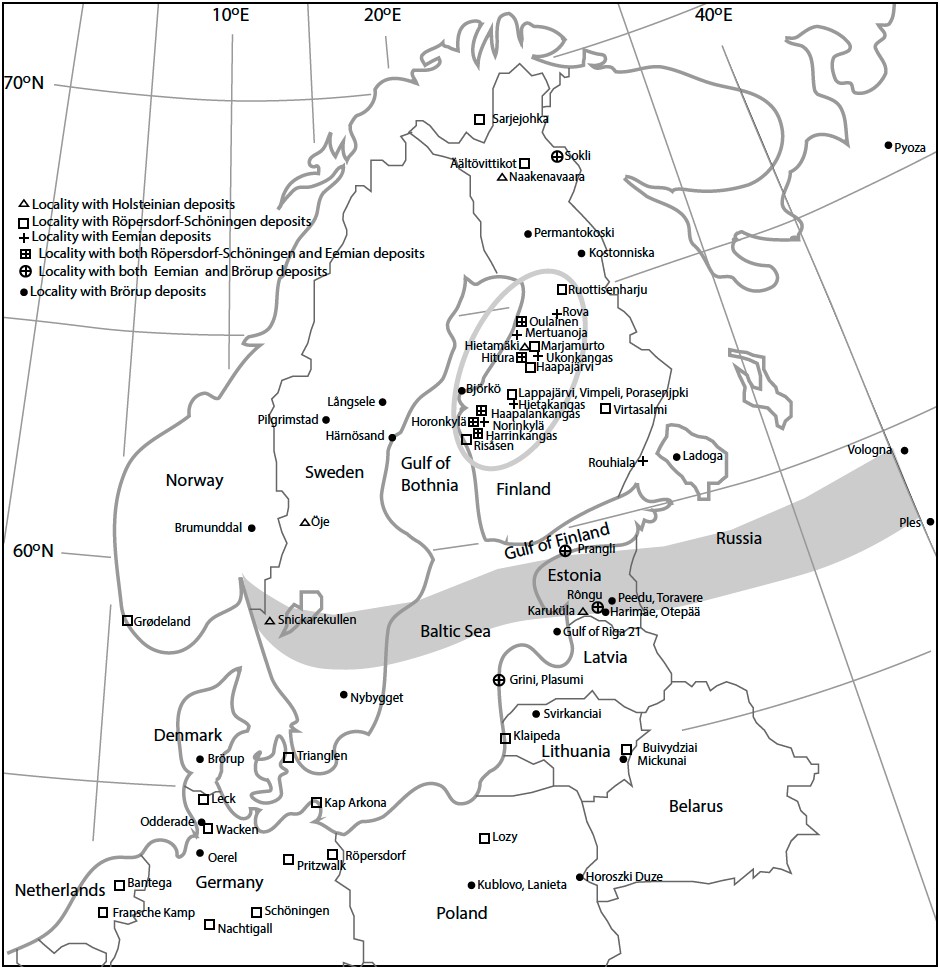 Map showing the localities in NW Europe and Fennoscandia where deposits representing the different warm intervals during the last 420,000 years of Ice Age are preserved. The grey ellipsoid indicates the location of the revised localities in the study. The thick grey W-E zone shows the approximate position of the inferred northern limit of boreal pine forest in the Late Brörup temperate interval c. 100,000 years ago. Photo: Matti Räsänen.

Beginning of the Last Ice Age Cooler than Thought

Most importantly, the research results change the established conceptions about the nature of the temperate Brörup interval in the beginning of the last Weichselian glacial cycle circa 100,000 years ago. The findings from Björkö Island in the UNESCO World Heritage Site of Kvarken Archipelago suggest that during this interval, central and southern Finland supported open birch forest tundra, which was later invaded by spruce, but not boreal pine forests as earlier thought.

– The northern limit of pine forests seems to have been located at the Gulf of Riga in the Balticum. The climate in southern Finland was thus considerably cooler than thought. These results are important as they provide background information for the modelling of future climate, concludes Räsänen.

The study conducted at the University of Turku has been published as an extensive review article in the peer-reviewed journal Quaternary Science Reviews.