The multidisciplinary mentoring programme of the University of Turku supports students’ transition into working life and the professional development and career planning of researchers and other staff. Mentors are working life professionals who wish to share their working life experience and views as well as their professional networks.

Would you like to share your expertise and experiences from working life, job search, and career planning with a student who is about to graduate? Would you like to encourage and support a young researcher to move forward in their career, or the professional development of a university employee in an expert or superior position? If you have been in working life for at least five years, why not become a mentor!

The University of Turku has a mentoring programme for Master’s level students about to graduate, young researchers, and staff. Central to the mentoring programme are independent meetings of mentoring pairs in which the pairs go over themes and topics related to working life and their own field. Joint seminars and a mentoring guide support the pair’s work.

Mentoring upholds the interaction between the university and the surrounding society. The mentoring programme also functions as a means of development for the university. From the participating mentors and mentees, we receive feedback regarding the education we offer and information about needs and expectations that are currently targeted towards employees and their education and training. 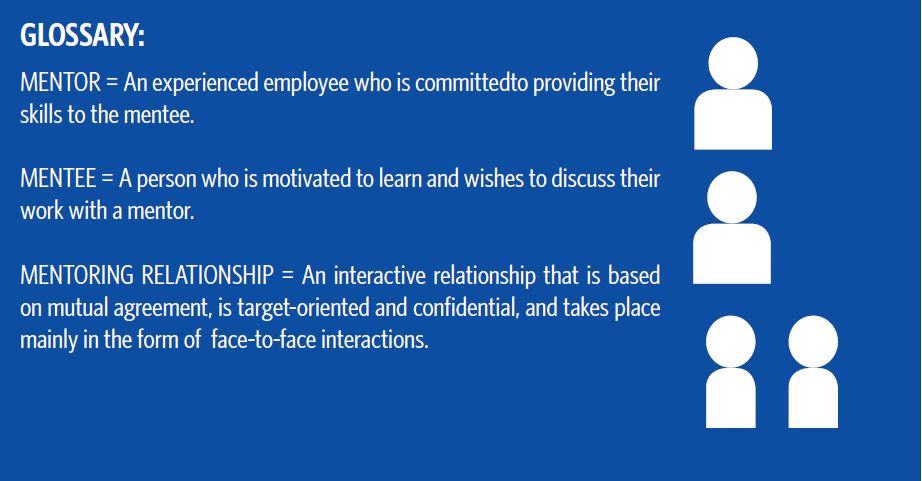 Register as a mentor!

Get to know the mentoring programme

Here is how mentoring proceeds

The phases of mentoring

Those wishing to become mentors can enroll all year round. For mentees, the application period to the programme takes place in September–October. The pairs are matched up in October–December and participants will be informed about their partner and joint seminar dates in November–December.

The programme launches in January when an introductory seminar and a pair’s first meeting is organized for both the mentors and the mentees. The pairs will receive a mentoring guide for support.

In the early stage, the mentor and the mentee get to know each other and agree on ground rules as well as create a plan for their work. It is necessary to discuss and set goals for mentoring and both parties involved already in the beginning.

During the year, mentoring pairs independently make appointments with one another in which they discuss the themes and topics they have agreed on together.

The phases of a mentoring year contain at least 3 seminars for all the participants:

In addition to these, possible themed seminars can be organized according to the participants’ wishes.

In between the joint seminars, mentoring pairs meet regularly.

In order to get the most out of mentoring, we recommend the pairs meet at least five times. On average, mentoring pairs meet 6–8 times. The pair agrees on their meeting schedule independently. It is worth setting the dates and times well in advance, perhaps even during the first meeting.

The arranged meetings are worth holding on to, as frequent cancellations may decrease the motivation to maintain the mentoring relationship. Mentoring is based on mutual interaction backed by reciprocal openness, trust, and commitment.

Mentoring pairs can shape their meeting and working habits and methods as well as pick the most suitable location for their meetings. Tying discussion to certain themes on each meeting has been found to be a useful practice.

It is also beneficial to reserve a long enough time period for a meeting, e.g. between an hour and a half and two hours. Typical locations for meetings include the mentor’s workplace, a coffee house, and the common rooms of the university but possibilities are limited only by imagination.

Our mentoring pairs have also, among other things, visited other businesses in the respective field. One pair combined a mentoring meeting with a fishing trip.

What is expected of a mentor?

Mentoring is a voluntary activity in which experts in working life share their experiences and support the mentee in thinking about the questions about working life and professional development.

As a mentor, you don’t have to

As a mentor, you’ll get

How time-consuming is mentoring?

Each mentoring pair plans their own meeting schedule independently.

The mentoring programme contains 2–3 joint seminars for all participants that take 1½–2 hrs each.

Ground rules are one the most important things a mentoring pair should agree on in the early stages of mentoring.

With ground rules set, both parties will be able to know what the other one expects of them and how to go about different situations.

Both are also aware of their own responsibilities, obligations, and tasks in the process.

At least agree on the following:

The mentoring programmes of the University of Turku and contact information

The multidisciplinary mentoring programme for students is meant for students who are about the graduate soon, and its aim is to prepare the student for the transition into working life. The programme is organized in Finnish.

All university employees who wish to think about their professional development and hone their expertise can participate in the mentoring programme for staff as mentees. The programme is meant for teaching and research personnel and other university staff, and those in supervisory or expert positions.

If you are interested in mentoring in which a person with disabilities who is in working life acts as a mentor, contact the Accessibility Planning Officer of the university. The participants will take part in the mentoring programme that is best in line with their career stage.

Register as a mentor!
Having a good listener and an open-minded mentor, who was committed to finding solutions to my identified needs, made the programme very rewarding.
Doctoral Researcher Elizabeth Eta

Do you want to be a Mentor? Apply now!

Become a Mentor for a Student