As technology develops, the relationship between humans and machines sparks new discussion. The seminar AI Ethics: Dialogue Between Europe and East Asia, organised at the University of Turku, focused on the future of artificial intelligence and robotics.

The seminar explored the topic from various multinational and -disciplinary viewpoints. Organised by the University of Turku, the Centre for East Asian Studies, and Turku AI Society, the seminar brought together researchers from Finland, South Korea, China, and Japan.

Professor Chihyung Jeon from the Korea Advanced Institute of Science And Technology discussed the 2015 South Korean reality TV series Grandma's Robot. In the series, a lonely grandmother living in the countryside receives help from various robots, from mechanical helpers that carry loads around the plot of land to social robots to drink a beer with.

According to Professor Jeon, such TV entertainment offers valuable insight on how the role of robots is becoming more prevalent in Korean society. In Korean imaginations and visions for the future, people expect great things of robots and artificial intelligence. An elderly population suffering increasingly from loneliness and a steadily declining birth rate are causing concern.

– Will robots take care of us in an aging society burdened by disasters?, Mr Jeon sums up the question many Koreans are asking. 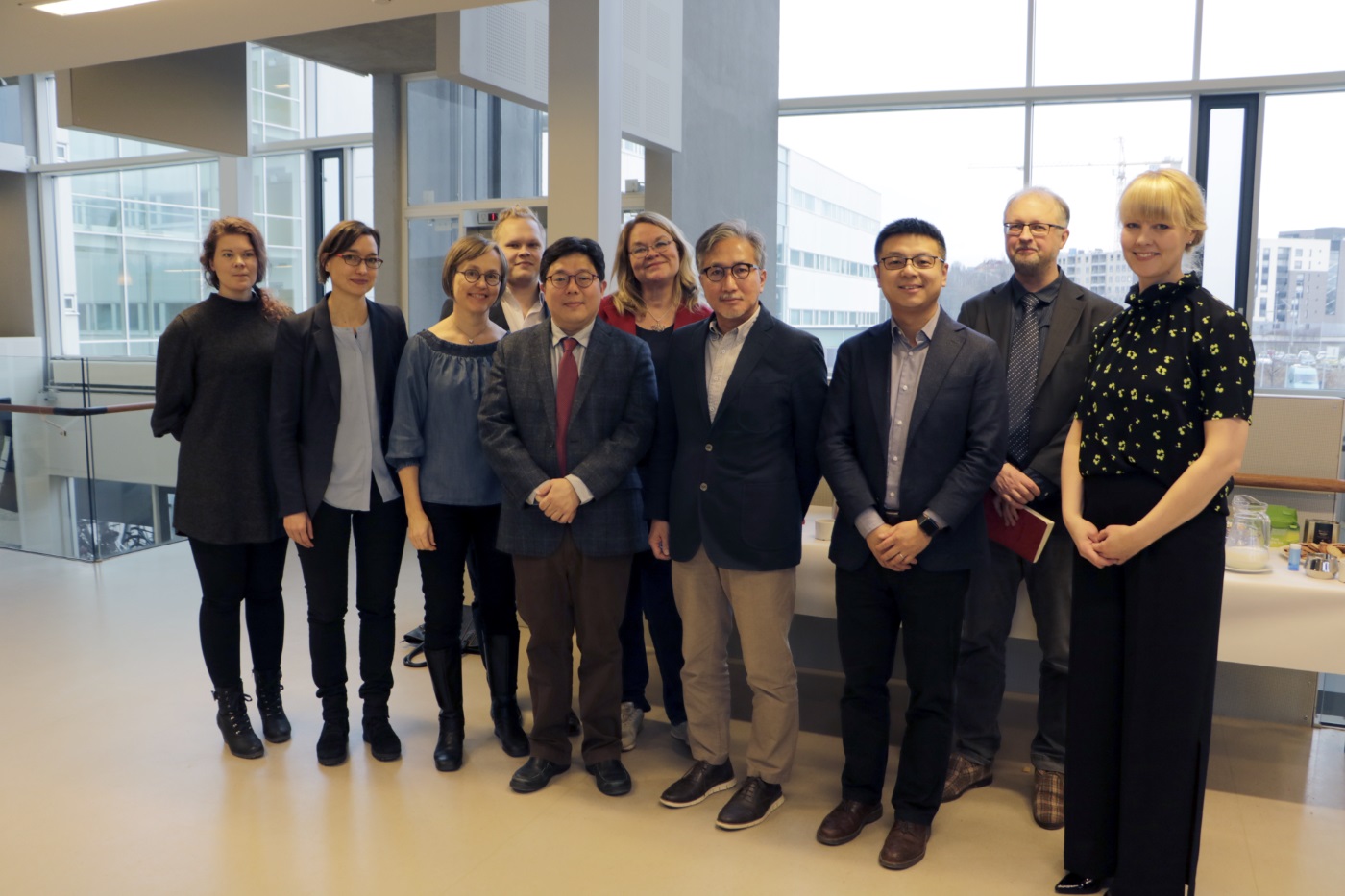 The political and monetary investments in the development of robots and AI have increased in Korea and other East Asian countries. The development has been accelerated by a number of important events in recent history.

Mr Jeon highlighted two moments that stirred up national discussion on the future of robotics: the unsuccessful rescue operation of the ship Sewol that sunk in 2014, and a 2016 competition where the artificial intelligence AlphaGo beat a world champion in the board game go.

– The success of AlphaGo was a period-defining moment in Korea. It sparked discussion on AI and robotics on a whole new level, said Professor Jeon. One rescue robot model has become something of a national celebrity, and has even carried the torch in the 2018 Winter Olympics.
Professor Zhuo Zou from Shanghai’s Fudan University focused on another turning point: the processing power of computers can no longer increase at a rapid pace, and now computing hardware specialists will need to look for new, more creative ways of development.

For instance, Mr Zou's own research focuses on replacing the present-day Internet of Things with more autonomous intelligent devices that no longer require a continuous connection to the cloud. The goals are improvements in user privacy, latency, and power consumption, as well as making AI technology a more invisible part of everyday life.

– The most profound technologies are those that disappear, summarised Professor Zou.

Practical artificial intelligence applications are no longer only found in science fiction. The development of smart, autonomous devices has advanced quickly, but there are still many unanswered questions about the relationship between humans and machines. 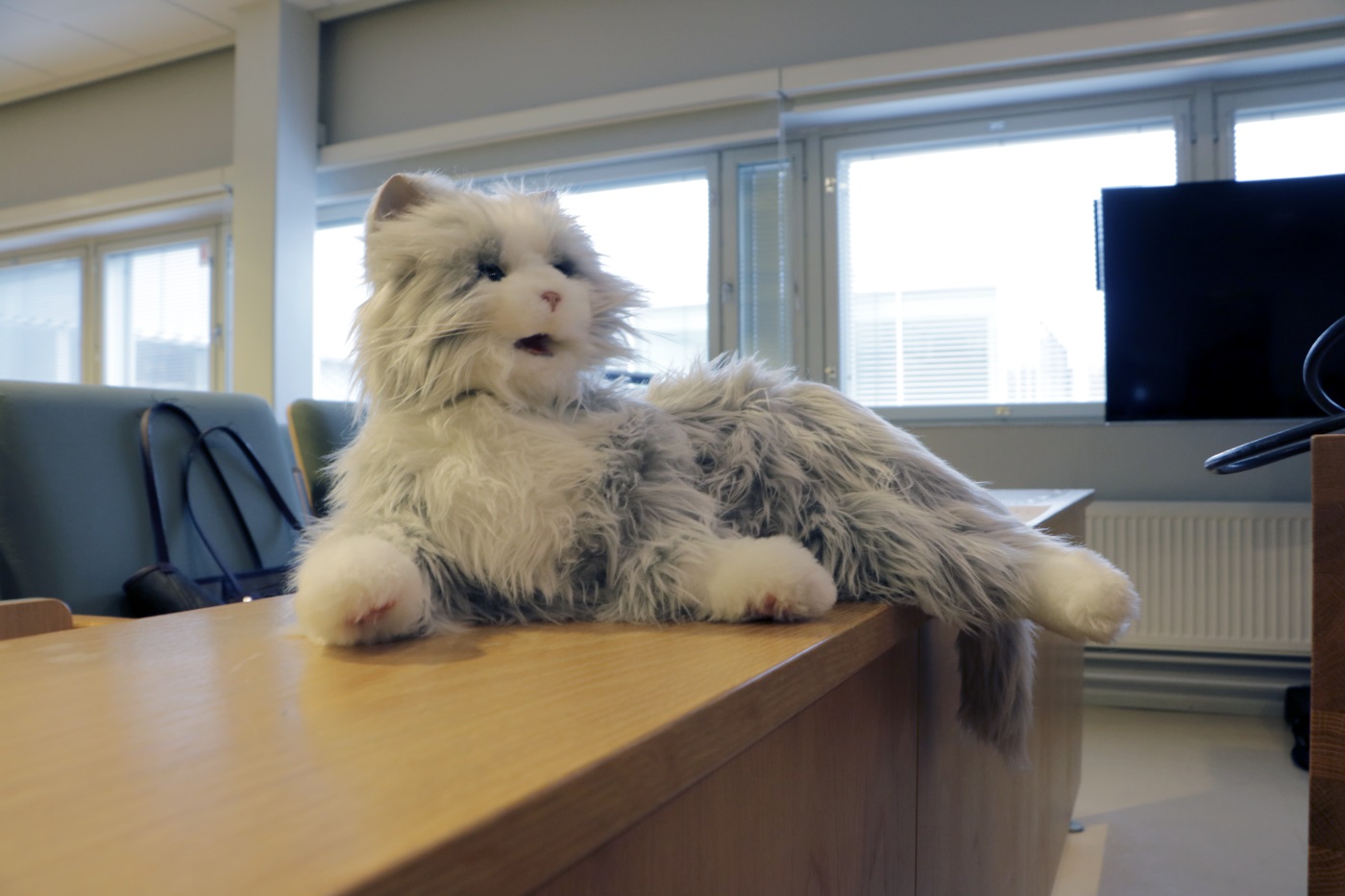 A robot cat commented on the seminar presentations.

East Asia and Finland share substantial IT expertise as well as ever-increasing enthusiasm towards artificial intelligence and robotics. However, focusing solely on technical development can be destructive in the end. The future of AI needs to be planned methodically while debating ethical questions.

For example, there are considerable ethical challenges in machine learning, especially in how the presuppositions and questionable opinions of human users can be transferred to the inner workings of an artificial intelligence. Hokkaido University's Professor Eijun Senaha focused his attention on certain service industry robots that have been made to resemble women, and how future robotics can reflect old-fashioned concepts of gender roles, for instance.

People do not really yet know what to think of human-like robots and artificial intelligences. However, interaction with machines is undoubtedly becoming a more important part of peoples’ lives.

Jeon and Zou pondered whether or not people can find working or conversing with a machine meaningful and worthwhile. Currently, the limitations of a robot's intelligence and physical capabilities quickly reach their limits and frustrate people. However, things might be changing sooner than we think.