The Annual Conference and General Assembly of the Coimbra Group was held in Padua, Italy on 8-10 June 2022. The theme of the Annual Conference of 2022 was Academic Freedom in a Transforming World. The conference was arranged at the University of Padua, which currently celebrates its 800-year anniversary.

On Thursday, 8 June the Coimbra Group live broadcast featured the main discussion of the conference with the theme Universa Universis (Universally and for All): Academic Freedom in a Transforming World. Important addresses and contributions were heard and the conversation was inspiring. The event succeeded well in the Coimbra Group’s mission of cherishing the sense of togetherness in European academic context.

The second session broadcast on Thursday was a panel discussion titled “Viewpoints from the Alliances of European Universities”. The moderator of the session was Ludovic Thilly from the University of Poitiers, as the Chair of the Coimbra Group.

— One of the biggest missions of the Coimbra Group is fostering international mobility amongst students, staff, and researchers of universities around Europe. The Coimbra Group, in fact, inspired the European Commission to create the Erasmus programme, which was the very first European alliance promoting cooperation and mobility, said Ludovic Thilly introducing the topic.

The panel consisted of eight participants from universities across Europe, representing an alliance of European universities each. Rector of the University of Turku, Jukka Kola, represented the EC2U Alliance in the discussion. The panel discussed and presented their alliance through guiding questions, revolving around strengthening international cooperation, academic values (such as academic autonomy, social responsibility, equitability), and societal responsibility and community impact.

Rector Jukka Kola represented European Campus of City-Universities, e.g. the EC2U Alliance in the discussion. The Poitiers Declaration initiated in 2016 was the starting point of the EC2U Alliance.

Kola also emphasised the impact of the new joint Master’s degree programmes on the entire alliance.

— Our main goal in the EC2U Alliance is the development of innovative spaces between campuses and cities. The emphasis of the EC2U is to strengthen the attractiveness of the European education area beyond the European union and Europe.

For the question concerning the mobilisation of communities for social and civic engagement, Kola introduced the listeners to the EC2U Think Tanks.

— In addition to the Think Tanks, an excellent way of mobilising communities for social and civic engagement is creating cooperation between all stakeholders including students, staff, teachers, researchers, and also the cities and municipalities. This is done by, for example, arranging EC2U Forums twice a year where everyone in the community is just as welcome. 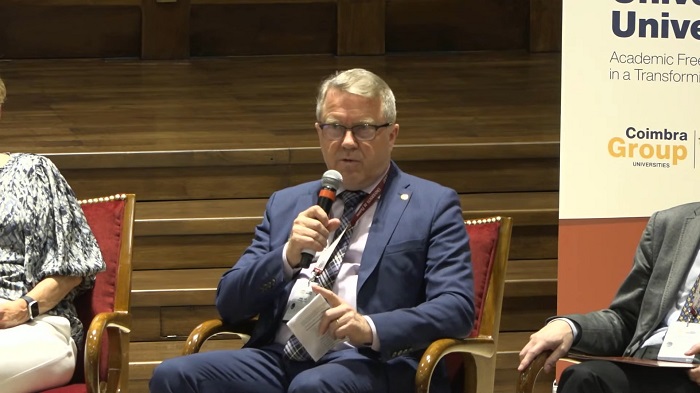 — Finally, one great matter I wish to touch upon is building togetherness and solidarity and sharing academic values. Our solution to that in the EC2U Alliance was welcoming the Ivan Franko National University of Lviv, Ukraine as a strategic partner of the alliance this spring as we signed a memorandum of understanding at the EC2U Forum in Pavia. It truly is a great honour to have them with us in the alliance, said Kola.

On Friday, 10 June, the final of the Three Minute Thesis (3MT) competition was broadcast. In the final, the three finalists presented their doctoral research in three minutes. The aim of the competition is showcasing the results of recent research while the challenge is making the presentation as brief and comprehensible as possible for anyone to understand. Effy Ntemou (University of Groningen), Ignacio Abadía Tercedor (University of Granada), and Omeed Neghabat (Aarhus University) were the three finalists.

The winner of the competition was Omeed Neghabat from Aarhus University with his research topic Looking at the human heart from the inside out.

The Coimbra Group is an association consisting of European multidisciplinary universities of high international standard. The association founded in 1985 is committed to creating strong academic and cultural ties in order to promote, internationalisation, academic collaboration, excellence in learning and research, and service to society. The Coimbra Group currently has 41 members in 23 countries across Europe. University of Turku and Åbo Akademi have been members of the Coimbra Group since 1995.