A Finnish research group has studied how seasons influence the function of the brain. Researchers at the Turku PET Centre showed that the length of daylight affects the opioid receptors, which in turn regulates the mood we experience.

Seasons have an impact on our emotions and social life. Negative emotions are more subdued in the summer, whereas seasonal affective disorder rates peak during the darker winter months. Opioids regulate both mood and sociability in the brain.

In the study conducted at the Turku PET Centre, Finland, researchers compared how the length of daylight hours affected the opioid receptors in humans and rats.

– In the study, we observed that the number of opioid receptors was dependent on the time of the year the brain was imaged.  The changes were most prominent in the brain regions that control emotions and sociability. The changes in the opioid receptors caused by the variation in the amount of daylight could be an important factor in seasonal affective disorder, says Postdoctoral Researcher Lihua Sun from the Turku PET Centre and the University of Turku. 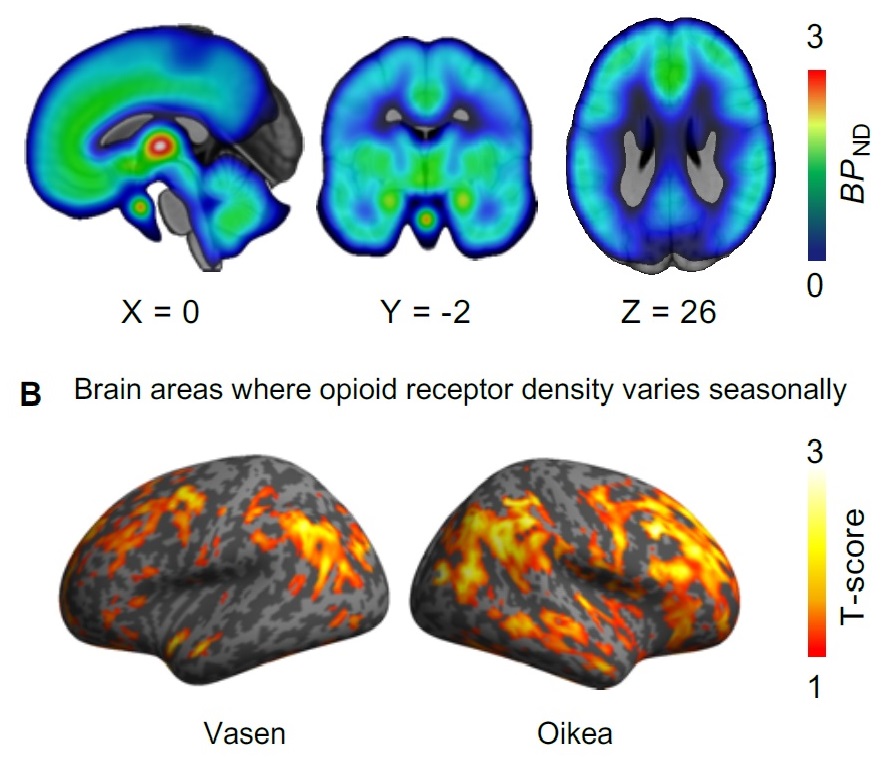 The researchers wanted to ensure that the changes in brain function were caused by the amount of daylight and not some other factor. To achieve this, they measured the opioid receptors in rats when the animals were kept in standard conditions where only the length of daylight hours was changed. The results were similar to those observed in humans.

– On the basis of the results, the duration of daylight is a particularly critical factor in the seasonal variation of opioid receptors. These results help us to understand the brain mechanisms behind seasonal affective disorder, says Professor Lauri Nummenmaa from the Turku PET Centre.

The study was conducted with Positron Emission Tomography (PET) and altogether 204 volunteers participated as subjects. A small dose of radioactive tracer that binds to the brain’s opioid receptors was injected in the subjects’ blood circulation. The decay of the tracers was measured with a PET scanner. The study is based on the AIVO database hosted by Turku University Hospital and Turku PET Centre. The database contains different in vivo molecular brain scans for extensive analyses.  Furthermore, the amount of opioid receptors was studied with PET imaging of rats. Animal studies were conducted at the Central Animal Laboratory, University of Turku, with the genuine support of Professor Anne Roivainen and Dr Emrah Yatkin.

The results were published in The Journal of Neuroscience.

>> Earlier this year, the same research group published an article on the link between the opioid system and symptoms of depression and anxiety.

Frontiers of Science seminars will start the spring season on Thursday 2 February at 12:00