What is an article processing charge (APC-charge)?

FullOA (Golden OA) and hybrid journals usually debit an article processing charge (APC-charge) for publishing the article. In 2019 the total sum of APC-charges for the university was in total 261 795,64 euros.

About 57 per cent of the charges target to FullOA-journals, 43 per cent to journals, which come out in hybrid publishing channels. The average APC-charge for FullOA-journals in 2019 was ca. 1680 euros and for hybrid journals 2050 euros. In 2019, University of Turku paid a bit less APC-charges compared with the previous year 2018. 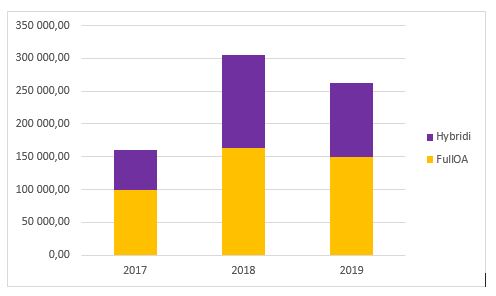 APC-charges concentrate for 4 big publishers: Whiley (16), Elsevier (12), Springer Nature/Nature Publishing Group (11 %) and for Bio Med Central 7 % (nowadays BMC is a part of Springer Nature). Considering individual journals University paid most for the journals Scientific Reports, Nature Communications and Plos One.  All of these journals are nowadays connected to the Springer Publishing Group.

At the University of Turku it is possible to get information of APC-charges at faculty, department and article level. Faculties of Science and Engineering, Medical Faculty and Special Units paid most of the APC-charges. Other faculties paid only a minor amount of the payments. This might be due to better offer of high-appreciated publishing channels for hard sciences.

OpenAPC-service does not, however, provide information of the division of payments within one individual organisation. More detailed information is available through University of Turku data reporting system ("tietovarasto"). You may also ask more detailed information from the library. It should be noticed, however, that on University’s reporting system (“tietovarasto”) the APC-charge is tight to one individual article. In some cases, several departments have paid a part of the article APC-fee. In such cases the report from the University*s own reporting system does not give the correct sum of the department's APC-charges as the payment is always per individual article. It can be estimated in General that around 25 % of the University*s publications have authors from several departments. E.g. if the APC-charge in total is 1500 euros and department A, B and C have paid their own part 500 euros of the charge the amount of 1500 euros is shown on their all's report.