A new study shows that horses can be more reluctant in new situations if they have multiple riders, have had several owners or the horse has been with its current owner only for a short period of time. The results of the international research group that studied the interaction between horses and humans also indicate that it takes time to build a good interactive relationship with a horse.

Horses have been living with humans for thousands of years. Following this long co-evolution, horses today demonstrate impressive social skills during their interactions with humans: they are receptive to human emotions and are very good at understanding human demands.

“Domestic horses may spend several hours daily in close contact with humans, which can affect horse welfare, physiology, and behaviour. Therefore, it is important to understand which factors can influence the horses’ emotions during interactions with humans and what shapes their relationship – particularly in novel situations that can be very stressful to the animals”, says the lead author of the study, Doctoral Researcher Océane Liehrmann from the Department of Biology at the University of Turku, Finland.

An international research team from the University of Turku and the University of Helsinki in Finland, and the INRAE of Nouzilly in France, studied interaction between horses and humans as well as how horses react in new situations. The researchers recruited 76 privately owned leisure horses from the Turku area (Finland) to perform two behavioural tests. 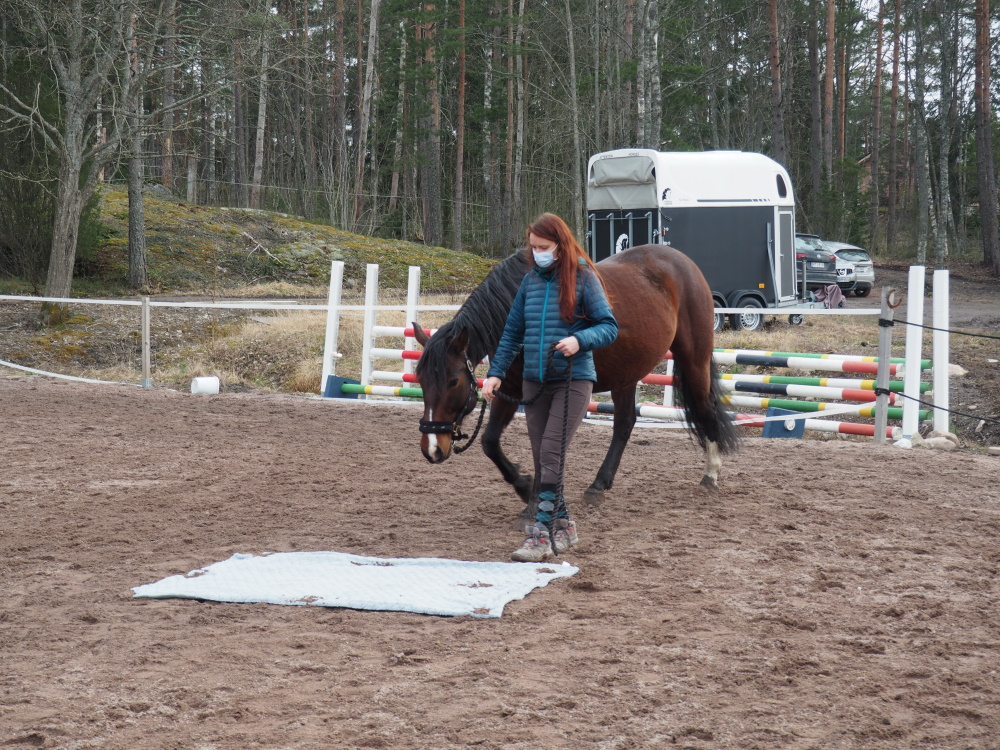 Océane Liehrmann guides a horse to a soft, unfamiliar surface, on which this horse has never walked on. Photographer: Veera Riihonen

In the research situation, the horses were led to walk on two surfaces that were new to them, a white tarp, and a fluffy blanket.  They were led to one of the surfaces by their owner and to the other one by an unfamiliar researcher. Second, the horses were presented with a fluffy stuffed toy either by their owner or by an unfamiliar researcher. The horse had one minute to freely come and interact with the toy and then the person approached the horse and tried to touch its neck with the toy.

“Interestingly, horses with an exclusive relationship with their owner were the calmest when approaching the novel surfaces and easily agreed to be touched with the toy. Horses that are regularly ridden or trained by different persons showed more stress behaviours in the test situations,” describes Océane Liehrmann.

“Horses often have to change ownership, which restricts their ability to make a long-term bond with specific humans.  We were particularly interested in studying how the length of the relationship between the horse and the owner affects the horse’s behaviour in new, potentially stressful situations,” says Océane Liehrmann. 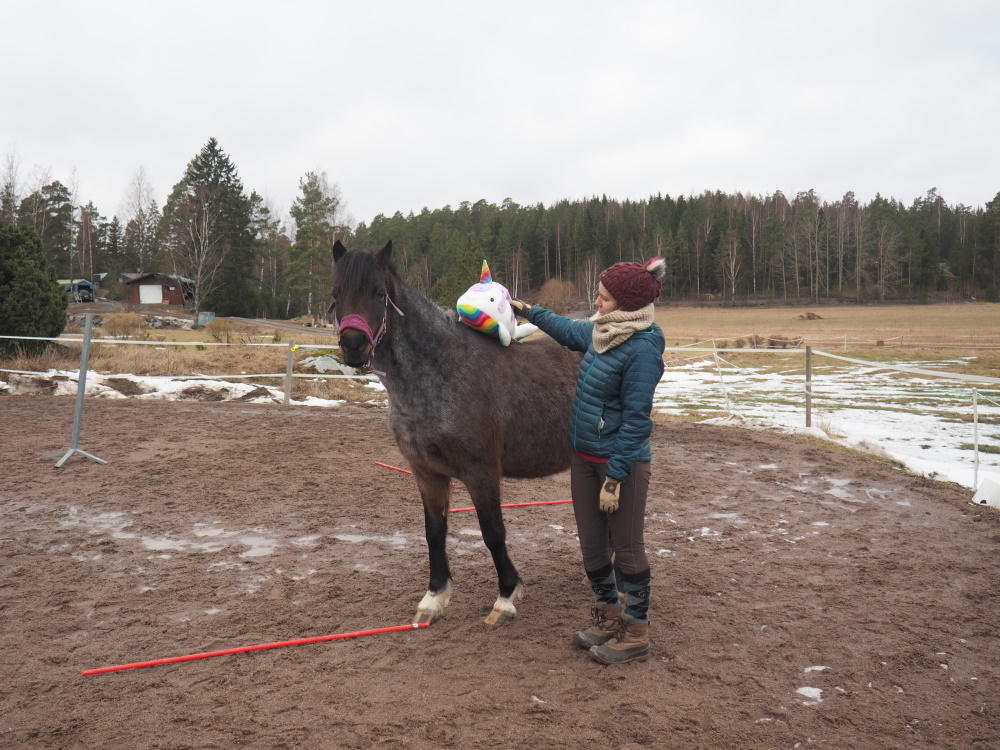 Océane Liehrmann observes the horse’s reaction when it is touched with an unfamiliar stuffed toy. Photographer: Veera Riihonen

The results showed that horses with shorter relationships with their owner were more reluctant in novel situations and presented more stress behaviours when asked to interact with novel objects and surfaces. On the contrary, horses that had at least 6 to 8 years of relationship with their owner, were mostly very calm when introduced to the surfaces or the stuffed toy.

“Geriatric horses often suffer from poorer eyesight, and it has been shown that they may feel more anxiety towards new situations than younger horses. Therefore, older horses may perceive someone familiar as a secure base, feeling safer to walk over an unknown material when led by a familiar person.”

The study shows that having a shorter relationship with the owner, multiple handlers and numerous owner-changes can increase the horse’s reluctance to novel objects and surfaces and therefore may negatively impact the horse-human interactions in new situations.

“Our findings suggest that a positive horse-human relationship may take time to develop as it is shaped by multiple factors, such as the horse’s previous interactions with humans. Overall, the results show that animals’ relationships with their human caretakers should be better considered in animal welfare and its research,” Liehrmann concludes.