An international team of scientists found that sociality is not linked to intestinal nematode infection in Asian elephants. The researchers looked at loneliness and characteristics of the elephants’ social groups and found no differences in infection levels.

“Asian elephants are one of the world’s largest and longest-living terrestrial mammals, and have a very complex social life. However, studying sociality and parasite infection in Asian elephants in the wild is very difficult, if not impossible, due to the dense forests they live in and large roaming distances,” says Postdoctoral Researcher and one of the two lead authors of the study Martin Seltmann from the University of Turku.

“We studied these characteristics in 71 Asian timber elephants living in their natural habitat in Myanmar. These elephants work in the timber industry, where they pull and push logs out of the forest. This is a unique research environment and population that allows us to study many elephants living in their natural environment, but at the same time have detailed information about their social lives and infection dynamics,” says Postdoctoral Researcher Carly Lynsdale from the University of Helsinki, the other lead author of the study. 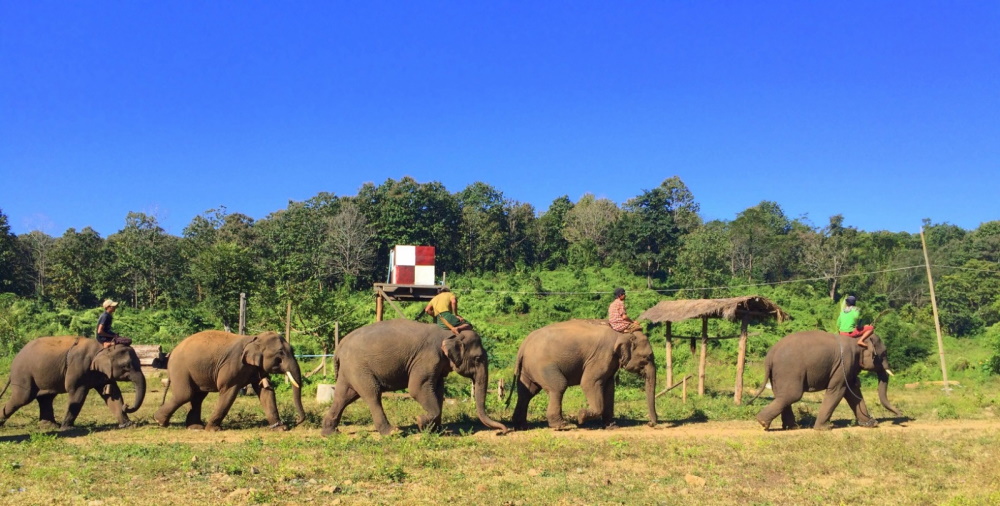 Elephants and their handlers on their way to work.

Every elephant works together with an elephant handler (mahout), and this relationship can last a lifetime. Therefore, a handler knows very well about his elephant’s behaviours and is able to give detailed information on its social interactions with other elephants.

From 2014 to 2018, the scientists asked the handlers if their elephants have friends or if they prefer to stay alone. Furthermore, the team assessed the size of the elephants work groups as a measure of social group size and the number of males and females within the work group. In addition, the researchers counted the eggs of intestinal parasites (nematodes, or round worms) in fresh faecal samples. These egg counts are a reliable estimate of the extent of parasite infection.

Though this study did not find evidence to support an association between nematode infection and sociality, there is increasing support for the view that costs of infection may in fact be minimised through socially-promoted resistance and/or tolerance pathways.

The reasons underlying the absence of associations between infection and social behaviour in elephants remain largely obscure. However, according to the scientists, the research adds to a bigger picture of how social relationships can help prevent or increase the risk of infection in group-living animals.

“Timber elephants live in mobile working units without strong competition or dominance hierarchies, and this may instead mean that intestinal parasites either do not present large sociality costs for these elephants or that these costs are mitigated by the social health benefits of group living more than in other host taxa. Additionally, there might have been weak infection – sociality associations present in this system that could not be captured by the study’s design,” says Lynsdale.

The findings of this new study highlight the need for finer-scale studies, establishing how sociality is limited by, mitigates, or protects against infection in different ecological contexts, to fully understand the mechanisms underlying these pathways.

Photos can be used freely by media in related coverage as long as the name of the photographer is mentioned.

> Elephants and their handlers on their way to work. (Photo: Carly Lynsdale)