Listen to the Birds: Illegal Diet Pill DNP Might Kill You on the Long Run

DNP, a weight loss agent withdrawn from the market in the late 1930s due to acute toxicity, has become increasingly popular in recent years through online illegal sales. A new study using a lifelong DNP treatment in an avian model found that while no obvious toxic effects were detected on the short to medium-term, DNP reduces lifespan by 20% on the long run.

Weight loss appears as a holy grail in our modern societies. DNP (2,4-dinitrophenol), a molecule decreasing the efficiency at which food is converted to cellular energy, was discovered in the early 1930s to be an efficient chemical treatment to promote weight loss in humans. Due to acute toxic effects and the death of several users, DNP was rapidly withdrawn from the market and not used for decades. Yet, DNP has re-emerged over the last decade for human usage through its illegal selling on Internet, leading to several death cases and the recent conviction of an online seller. A global alert was issued by INTERPOL in 2015.

Despite its acute toxicity, the US FDA granted DNP an open Investigation New Drug (IND) approval to begin clinical testing linked to its potential to prevent ‘metabesity’ (i.e. global comorbidities associated with the over-nutritional phenotype). While DNP had a known acute toxicity in humans, it was still used by scientists at low doses in animal models to test hypotheses related to ageing. In 2008, it was for instance discovered that DNP can have beneficial effects on lifespan in laboratory mice. Dr Antoine Stier, who is currently working as Collegium Researcher at the University of Turku in Finland, suspected that the beneficial effects of DNP in mice could be attributable to obesity prevention and could mask the chronic toxicity of DNP for non-obese animals and humans.

A new study led by Dr Stier at the CNRS/University of Strasbourg, France, used captive zebra finches to investigate the impact of a long-term (> 4 years) DNP treatment on key hallmarks of cellular ageing and lifespan.

– The birds, which are a widely used avian model not displaying age-related obesity, were treated with a dose of DNP per kilo which was well within the range of what is used illegally by humans. The dose had no short-term deleterious effects and only mildly increased the metabolism of these birds, says Dr François Criscuolo, who is a CNRS researcher in Strasbourg.

– While DNP-treated birds were looking healthy, demonstrated similar physical performances than control animals, and were not displaying physiological signs of premature ageing, this new study reveals that the lifespan of the birds was actually reduced by 20% (~ 1 year). This would be equivalent to a reduction of approximately 15 years in human life, which should provide a serious warning signal to both current and prospective users, as well as to scientists investigating its use as a medicine, adds Dr Stier.

aving data from other long-term studies of DNP in animal models seems imperative to enable the scientific community and stakeholders to have a broader and more realistic picture of the long-term effects of DNP treatment before its potential therapeutic usage in humans. 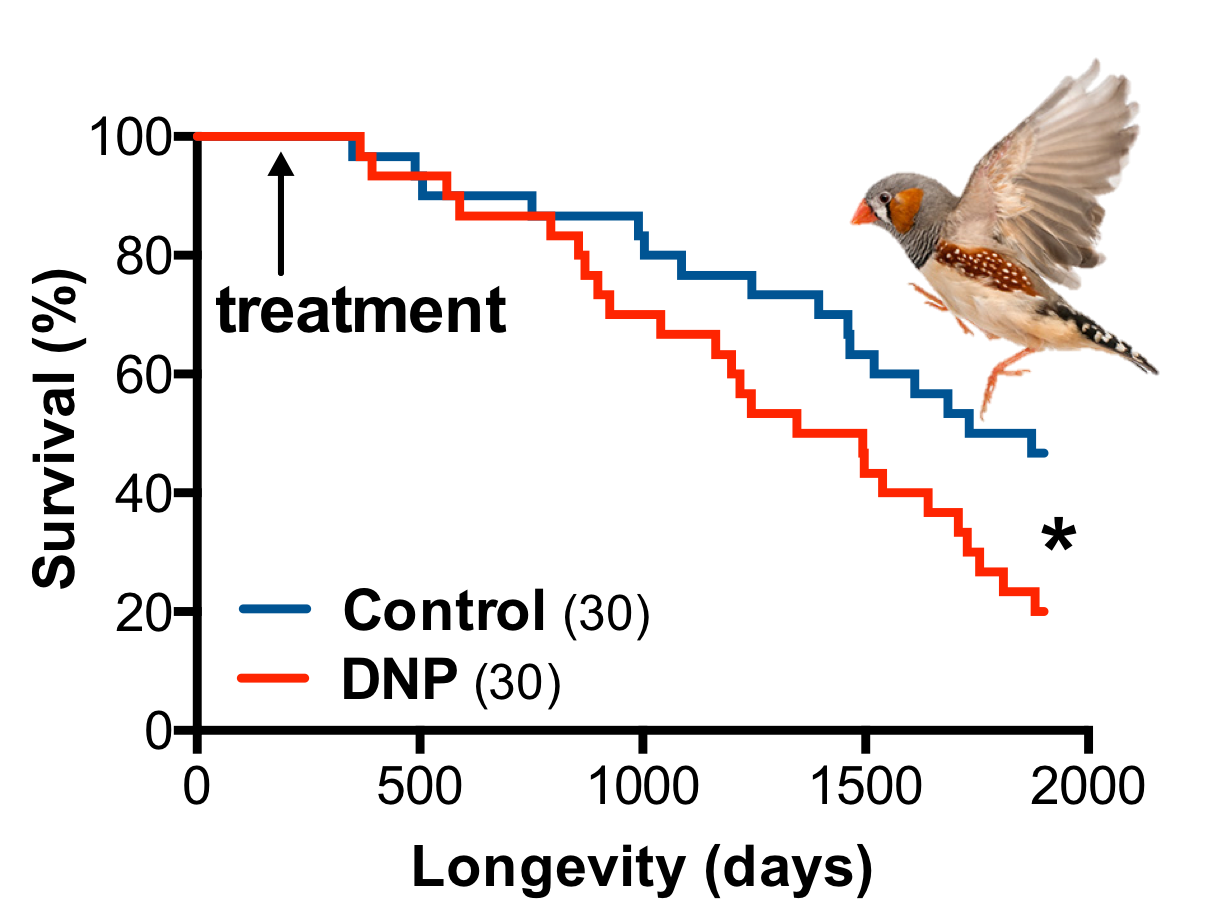 The study was conducted at the Department of Ecophysiology & Ethology from the IPHC (CNRS / University of Strasbourg, France), in collaboration with the University of Aberdeen (UK). Dr Stier was funded by the EU H2020 Marie Sklodowska-Curie IF program ((#658085) and the Turku Collegium for Science and Medicine at the University of Turku.

> The research was published in the journal Comparative Biochemistry and Physiology Part C.