Keyword: Brahea Centre at the University of Turku

In the past years, various projects have worked to improve the safety and infrastructure of small ports. Now experts from Finland, Sweden, Estonia and Latvia have joined their forces to develop better services in the small ports of the central Baltic Sea region. The focus of the CBSmallPorts project is on energy efficiency and joint marketing of the area.

The European partners through various workshops in Durres, Albania, guided a group of Albanian partners in September 2019, to become the next trainers of the designed and developed LLL courses. They later on organized trainers training to be able to run the courses by themselves

Many boaters are still occasionally releasing their sewage directly into the sea. The reason, however, may not be their own indifference, but rather the result of a lack of sewage pump-out stations or the fact that stations may be located in the wrong places, in poor condition or have insufficient user instructions. The purpose of the BATSECO-BOAT project is to survey the needs of boaters and improve the sewage pumping services throughout the entire central Baltic Sea region.

The Ministry of Education of the Sultanate of Oman has approved the Finland University tender on developing the evaluation of the effectiveness of the teachers’ continuing education and initiating research. The project is carried out by the University of Turku. According to Finland University CEO Pasi Kaskinen the 18-month contract is considered a significant opportunity. 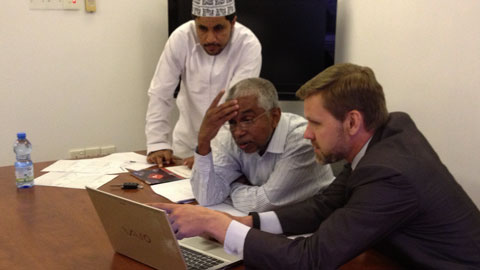 Novel Augmented and Virtual Reality Applications Developed for Industry Use

The goal of a new research project is to bring construction plans, models and product information to use outside of office buildings in an accessible and user-friendly form. The project is a joint effort between the University of Turku and several partner companies.

Experts in the water sector introduced the visiting Chinese Ministry of Water Resources officials, hosted by the Finnish Ministry of Agriculture and Forestry, to the themes and solutions related to flood water control and the quality of water.